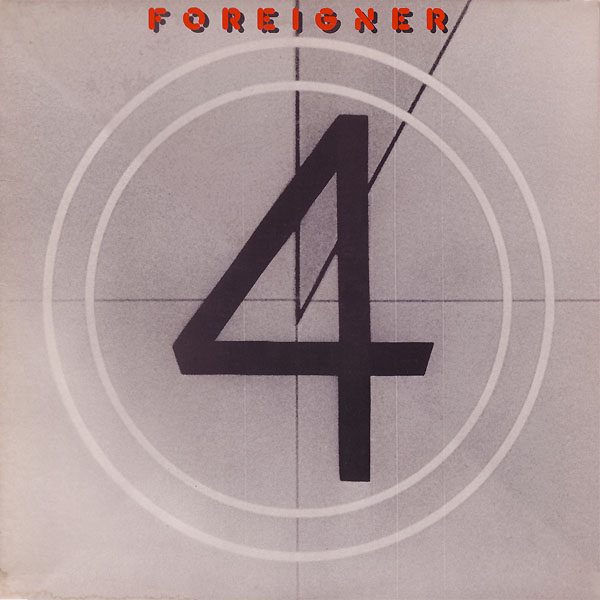 The album that Rolling Stone’s Kurt Loder called “the band’s best and most adventurous album.”

Numerologists rejoice! The magic four is once more invoked, this time in a whittled piggy pun as Foreigner was reduced to a fourtet for their fourth album. The operative number at work here, really, is six million: the number of 4’s sold in the US alone. Credit producer Mutt Lange (Highway to Hell, Back in Black) with finding a perfect balance between the rock guitars, synthesizers and Lou Gramm’s estimable pipes.

Say what you will about the man, those two AC/DC albums, 4 and Pyramania speak for themselves as some of the best rock ever recorded. Lange’s production has the effect of turbocharging great rock songs (“Juke Box Hero,” “Urgent”) and elevating what might have otherwise been filler (“Break It Up,” “I’m Gonna Win,” “Girl On The Moon”). The real turning point for Foreigner, however, occurs on the ballad, “Waiting For A Girl Like You.” Given a lush production a la 10cc’s “I’m Not In Love,” Waiting introduced a sensitive side to a group that, only one album earlier, seemed hell-bent for lifetime membership in the He-Man Woman Haters Club. Like it or not, Foreigner was now an arena rock band, and you don’t pack arenas with teenage boys alone.

Of course a world tour followed, but then something strange happened: silence. Foureigner the Four-Headed Hydra was soon to become an animal of legend, not to be seen again for nearly four years, when they emerged with the mild (and merely triple platinum, pshaw) Agent Provocateur. Thus classic Foreigner stops at 4, but not a minute earlier.