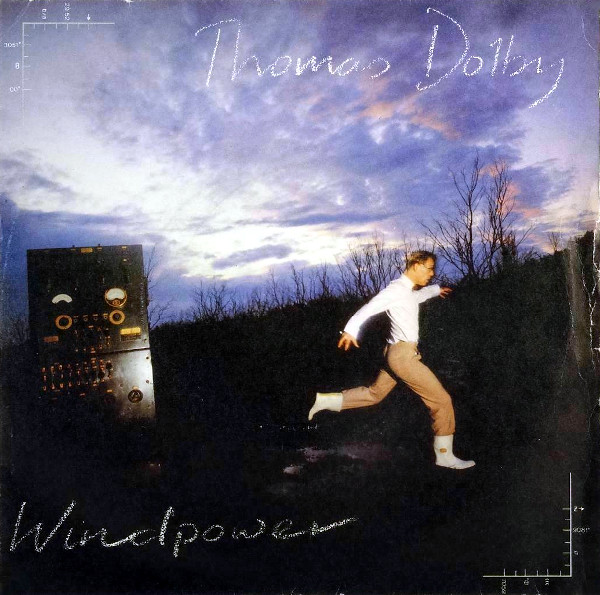 A Top 40 hit in the UK, and a signal that the winds of commercial favor were at Dolby’s back.

It’s funny the things you hear in music sometimes. Being a big Jethro Tull fan, what struck me first about Windpower was the repetition of the word “tull” at the end of “continent” and the brief inclusion thereafter of the flute. Surely, I thought, Ian Anderson must have heard this as a coded message from the musical gods (enter Into the Light and Under Wraps). Now, Anderson has acknowledged the influence of Thomas Dolby, so I’m not completely crazy, but I wonder sometimes if music isn’t a complicated puzzle of interlocking pieces. (Probably everything is.)

Although it was the first single issued after The Golden Age of Wireless, “Windpower” was actually the fourth song from that album to be released as a single, and Dolby’s fifth single overall. In other words, he was a pro at promoting his music at this stage, as evidenced by his smartly executed one-man band performance of “Windpower” for Top of the Pops. It’s a great song which has aged remarkably well and reminds me of XTC more than a little in the vocals. Also, the weather report at the end points ahead to OMD’s Dazzle Ships. Honestly, there wasn’t a song on Golden Age that couldn’t have worked as a single.

Flying North supports the previous statement. The leadoff album track on the original version of Golden Age, it’s a sweeping song with a terrific sense of drama. For a guy who couldn’t sing, Dolby pulled it all off remarkably well by pulling the right levers, like a Wizard of Ozzillators. As influential as this music was, no one else really managed to combine science, storytelling and pop in the same way as Dolby. Kate Bush’s “Cloudbursting” might be the closest comparison, and Jethro Tull certainly tried on songs like “Radio Free Moscow.”

In addition to the 7-inch single, a 12-inch single was released that featured both tracks in an extended format. The extended versions are rightly identified as extended mixes rather than remixes, as they extend the pleasure by a minute without fiddling too much with the originals. There are a few extra sounds added into the mix, but nothing radical or revisionary.