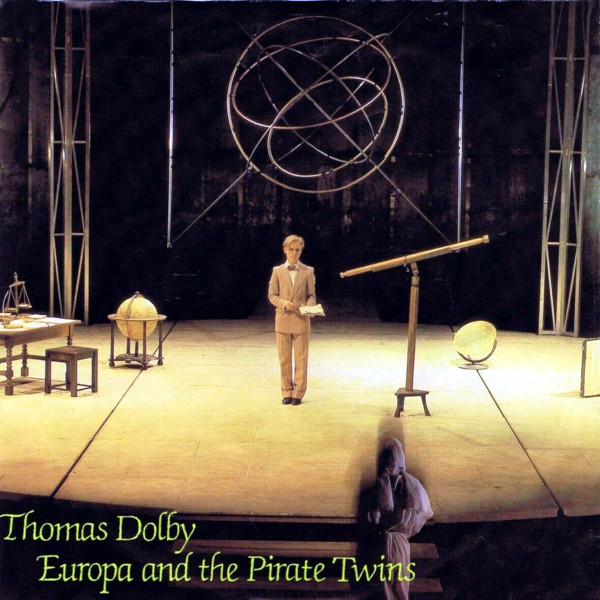 The romantic ideals of the past rendered through the techknowledgey of the future.

Germany in the 1970s was an interesting place, as you had the electronic music of the future being played in the cathedrals of the past. David Bowie’s Low and especially Heroes captured this odd juxtaposition perfectly. Artists like Ultravox and Gary Numan carried the concept further by replacing the romantic figures of the past with robots. Thomas Dolby did something different: instead of replacing the old romantic heroes, he filmed them through the lens of modern technology. Europa and the Pirate Twins might be the most captivating example of this.

The story of Europa (and Dolby was a very good storyteller, which carried over to his groundbreaking videos) begins with a young boy and girl, playmates brought together by the war and absent fathers, who cross paths again when the boy sees the girl years later on a magazine cover. He recalls their days playing pirates, and longs for that connection again. There’s an innocence to the highly romanticized notion of their reunion, but Dolby’s view of the past isn’t passive. There is the pervading sense in his music that, using the techknowledge he has today, Dolby can change the past and make the future better.

A year passed between the UK release of this single and its US release, the span of which featured the release of Dolby’s first album, The Golden Age of Wireless. The early UK single featured the pre-Wireless Therapy/Growth on the flip side, which recalls the European techno-decadence of Heroes and makes interesting use of a French radio broadcast in the background. A 12-inch version replaced the A side with a slightly extended version and the intriguing Leipzig, an early track from 1979. “Leipzig” reminded me immediately of Bowie’s “Sons of the Silent Age” and Ultravox, popular influences for the “new wave” of synthesizer bands that emerged in the 1980s.

The US single included Radio Silence on the flip side, identical to the album track. This song and Europa apparently had a powerful impact on Jethro Tull’s Ian Anderson, who changed the course of his band to follow the siren’s song of Dolby’s mechanical dream—and promptly crashed upon the rocks of cacophony. Unfortunately, it’s hard for me to hear these songs today without being reminded of Jethro’s folly, but apart from that they really are the work of a singular genius. And Dolby would soon have his own misadventures in uncharted waters…