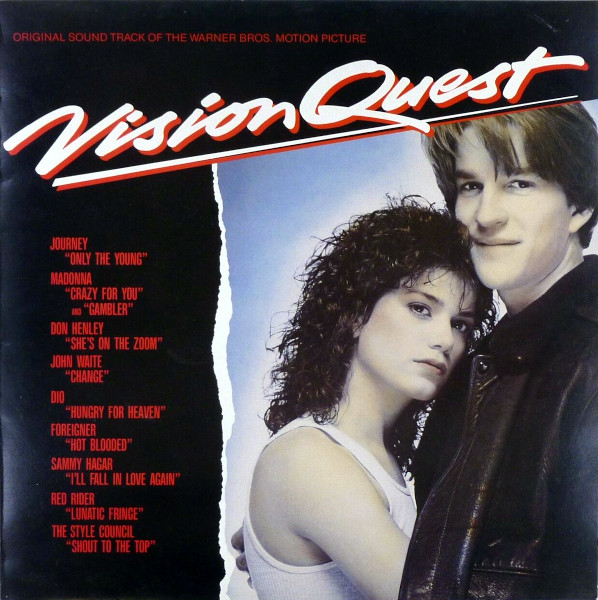 I saw maybe thirty minutes of this movie on tv, figured it was about the stupidest thing I’d ever seen, and went back to watching cheesy ‘60s science fiction (“The radiation just seems to make it stronger…”). Vision Quest fed into every sweaty, fungal little fantasy that ever crept into the crack of a high school shower tile: boy gets super strong, shows up his parents and teachers and gets laid by a hot, college-age chick. In fact, just thinking about it makes me want to take a shower.

So why did I buy the soundtrack? Because it cost me a dollar. Because it has Dio’s “Hungry for Heaven” on it and I wanted to see if it’s the same as the Sacred Heart version. (It is.) And because, just in case anyone ever asked me what was the dumbest movie I ever saw, I could pull this sleeve out and say “This one.”

The soundtrack isn’t nearly so bad. It has some great rock tracks on it, including “Lunatic Fringe” and “Hot Blooded.” It also contains actual hits that were unique to the movie soundtrack: Journey’s “Only the Young,” Don Henley’s “She’s on the Zoom” and Madonna’s “Crazy For You.” (She also contributed “Gambler” to the soundtrack and made a cameo in the film as a singer.)

Oddly, the album doesn’t contain anything from Tangerine Dream, despite the fact that they composed the film’s original soundtrack. I don’t recall ever seeing TD release anything from this soundtrack either. Maybe they used pre-existing material from earlier albums, or watched the film and filed some kind of injunction against releasing any material associated with it.