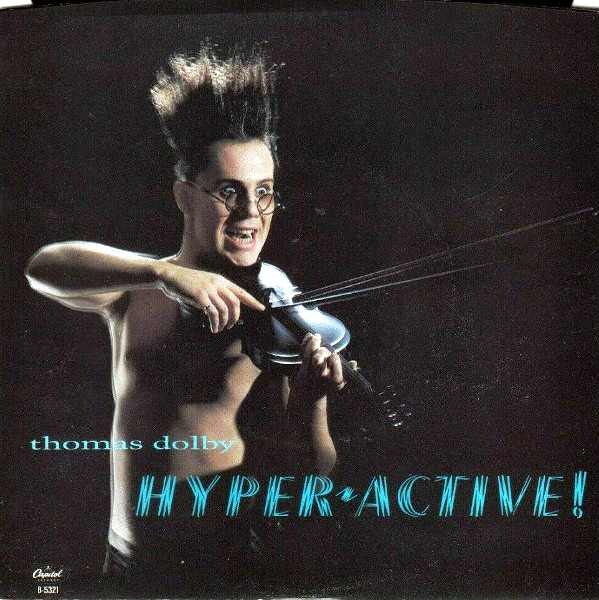 The followup to “Blinded By Science” was pretty hard to follow, a kind of Art of Noisier.

I admit to being totally bewildered by this song when it came out. The Golden Age of Wireless was still in regular rotation on my turntable and I was sure that Thomas Dolby’s next album would be even better. Or not. The Flat Earth left me feeling flat and I had no earthly idea what Dolby was on about in Hyperactive! A freaky video didn’t help matters. I had the same reaction to “Close (to the Edit)” and, years later, “Batdance.”

Today, I can appreciate “Hyperactive!” as a song ahead of its time. Dolby had originally pitched the idea to Michael Jackson, and you can hear where this is Dolby’s vision of a post-Thriller world. The everything-but-the-kitchen-sink arrangement is still offputting sometimes, especially when Dolby tries to rap, but for ideas per square inch you couldn’t pack this any tighter. A slightly longer version was released as a 12-inch mix and features the “hyperactivate” section up front; otherwise, it’s very similar to the 7-inch version.

For the flip side, Dolby re-used some of the music from “Blinded By Science” and “Europa and the Pirate Twins” to create the Art of Noise-y dub mix, Get Out of My Mix, credited to Dolby’s Cube (perhaps a reference to the cube-shaped heads used in the “Hyperactive!” video). An extended version of the mix appears on the US 12-inch single. In the UK, the B side was White City from the upcoming album. “White City,” too, is a song ahead of its time and suggests that I may need to re-evaluate my opinion of The Flat Earth.