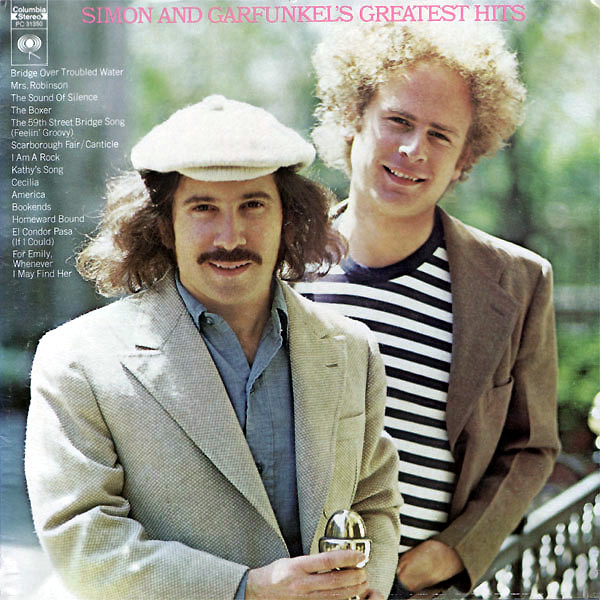 One of the greatest “greatest hits” compilations of all time, with over 14 million copies sold just in the U.S.

Although the duo only recorded a handful of albums, they left behind a rich legacy of music, much of it captured on Simon and Garfunkel’s Greatest Hits. Released two years after their breakup and photographed only moments before Paul Simon and his magic egg-shaped container of sperm were inserted into an elephant’s vagina (surely, Sherman, you’ve heard of artificial insimonation?), Greatest Hits collects many of their hats (okay, just the one hideously awful, penis-shaped hat) and combines them with previously unreleased live versions of “The 59th Street Bridge Song,” “Homeward Bound” and two others.

The inclusion of live tracks is unexpected and unusual, the abrupt sequencing between live and studio tracks unwelcome, but the brilliance of the music featured here is undeniable. “The Boxer,” “America” and “Mrs. Robinson” are some of the greatest pop songs ever written, combining the lyrical acuity of Bob Dylan with the songcraft of Paul McCartney. Their harmonies are also outstanding, somewhere between Phil & Don and CS&N, as evidenced on “Scarborough Fair/Canticle” and “The Sound of Silence.”

I’ve never seen Simon & Garfunkel mentioned as a progressive rock band, and yet the pair’s understanding and appreciation for the potentialities of music influenced many progressive artists (including Yes, who later recorded a fantastic version of “America”). Although the two have reunited for one-off performances (including a George McGovern benefit that coincided with this album’s release), their studio collaborations have been very few and far between. Unlike the CSN&Y sightings and Byrds reunion of McGuinn, Clark & Hillman, Simon & Garfunkel truly burned the bridge behind them, even as Simon’s solo work has provided a link to that past and a future to look forward to.