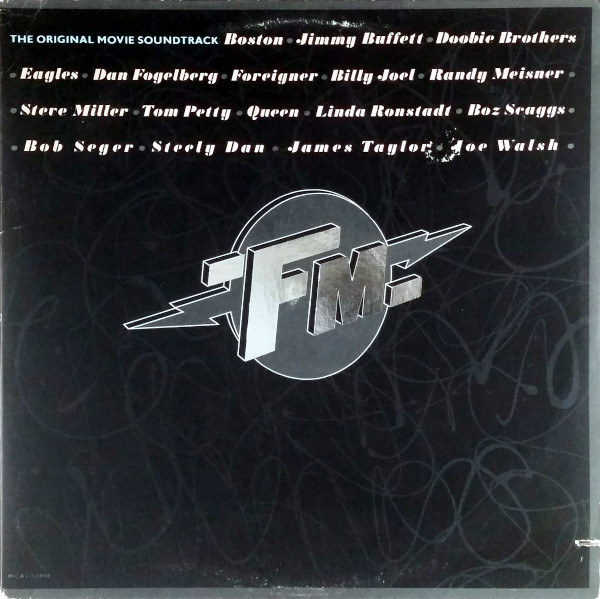 The music to the movie about the music on the radio, featuring the day’s radio stars.

The soundtrack to the film FM is pretty much a rotating time capsule of the late 70s. I suppose the only thing missing is some Fleetwood Mac. The movie, which centered on the tumultuous life of an FM radio station, helped set the stage for the popular TV series, WKRP in Cincinnati. The soundtrack simply acknowledges the most popular music of the day: Steely Dan, Doobie Brothers, Eagles, Foreigner, Tom Petty, etc.

My interest in the soundtrack begins and ends with the Steely Dan song, FM, featured here in its original version and a reprised instrumental version. It’s kind of “Josie” meets “Deacon Blues.” (Pete Christlieb plays the saxophone solo on both “FM” and “Deacon Blues,” and I’d be hard-pressed to say which one I like better.) At the time of the soundtrack’s release, Randy Meisner’s “Bad Man” also had yet to appear on an album. The rest of the songs were already in regular radio rotation, with the caveat that Linda Ronstadt and Jimmy Buffett took the extra trouble to perform their songs in the movie.

As someone who listened predominantly to prog and punk in the late Seventies, I don’t have any earthly use for this soundtrack. I like Queen, Steve Miller, Eagles and even Boston, but not enough to slough through songs by Dan Fogelberg and Doobie Brothers. In fact, for me, FM is reminder of why I bought all those albums as a kid: because I couldn’t find what I wanted on the radio. That is, until midnight, when the local college radio station would play “alternative” music. And, yes, I actually stayed up until midnight just to hear them. That and to watch the old Hammer films on PBS.