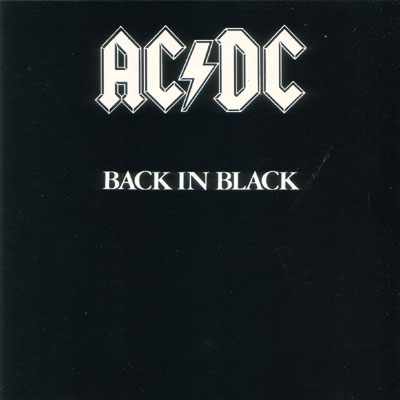 The title says it all: AC/DC was back and blacker than ever. Saw it off, stitch it up and back into battle. No apologies, no eulogies, the new guy’s name is Johnson. Anyone expecting a reflection on man’s mortality was in for a shock: “Hells Bells,” “Given The Dog A Bone,” “Let Me Put My Love Into You.” And then there was the brilliant title track, the greatest song never written about the death of a member. Recorded in the Bahamas with Mutt behind the boards again, AC/DC actually seemed to draw energy from adversity, fueling the band’s supernatural mythology. With his battery-acid voice, Brian Johnson has the band sounding like Aerosmith for anarchists (what is “Back In Black” if not a more menacing version of “Walk This Way?”), but only AC/DC could rock this intensely, this simply. The band may have built their brand with tongue-in-cheek humor and over-the-top rocking, but they earned their musical immortality with Hell and Black. (Now, where true immortality is concerned, I have to tell you that the album is utterly offensive and very likely the work of the devil from the first groove to the last.) Back in Black to date has sold an estimated 40+ million copies worldwide, making it one of the most popular albums of all time. It’s not a perfect record, but it’s close. Despite its unrepentantly atrocious spelling and sexual bravado without a hint of innuendo, the crispness of the production and energy of the performances have rarely (if ever) been equalled in the studio. Certainly, AC/DC themselves have never come close to matching it since. Of minor interest, the album was released with different track listings in various regions, some beginning with “Hells Bells” (the most ominous bells in rock since the arrival of Black Sabbath) and others with “Back In Black.” If you’re looking for a remastered copy, forego the 1994 Atlantic remaster and pick up the 2003 Elektra remaster instead.

Original LP Version (Australia/UK)
A1. Back In Black
A2. Hells Bells
A3. Shoot To Thrill
A4. Given The Dog A Bone
A5. What Do You Do For Money Honey
B1. Rock And Roll Ain’t Noise Pollution
B2. Let Me Put My Love Into You
B3. You Shook Me All Night Long
B4. Shake A Leg
B5. Have A Drink On Me