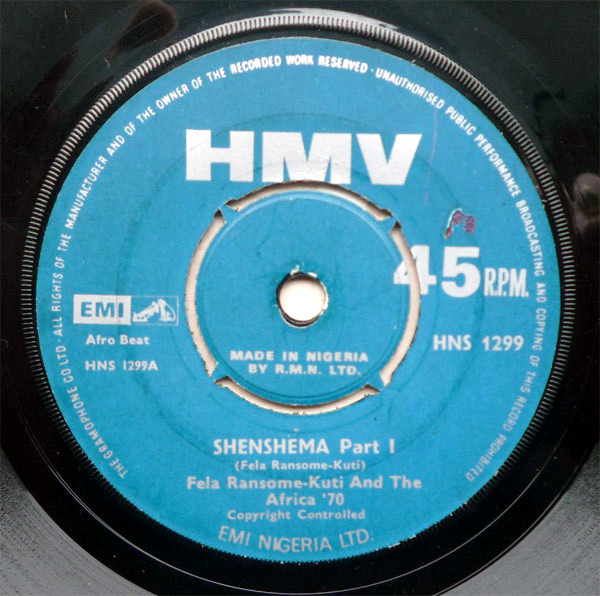 Kronomyth 3.5: Where did you get that blanc expression on your face?

On Shenshema, Fela Ransome-Kuti chastises Africans who were imitating the foreign, white culture. (The word apparently translates as a colonialist.) Musically, it finds the band on the cusp of the two-guitar attack introduced on Open & Close, with an increasingly tight sound and Kuti’s organ playing still in a central role. Placing any of Kuti’s early works in chronological order is always a crap shoot, but I’d feel pretty confident slotting this between the smoldering grooves of Why Black Men Dey Suffer and the introduction of the new Afro Beat sound on Open & Close and after.

Divided into two parts on the single, “Shenshema” is conceived as a continuous song; the division was convenient, not conceptual. It starts with the group laughing, but it’s a menacing sort of laugh, as though the band knew a comeuppance were coming. The rhythm section presents an intoxicating pattern that features tuned percussion (something of a rarity in their music), followed by Fela’s organ and the big baritone sax of Lekan Animashaun. After all the players are presented (horn section, congas, bass, guitar) the song settles into a different groove and moves along briskly for the next eight-plus minutes. This is a tighter, more purposeful approach than earlier songs, as Fela and the band were constantly sharpening their sound.

The self-appointed standard-bearer of a social revolution that sought to return to Nigeria’s cultural roots, Fela wastes little time in dressing down what he sees as a rejection of those roots. Black men who act like white men are shenshema. Black women who bleach their face are shenshema. It wasn’t the first or last time that Fela would highlight the human divide in his own country (cf. “Ikoyi Mentality Versus Mushin Mentality,” “Swegbe and Pako”).

Recorded during a remarkably prolific period in Fela Kuti’s career, “Shenshema” is one of the best examples of this important period. In fact, I would tell you that Kuti’s discovery of Afro Beat was one of the most important musical developments in the twentieth century. Unfortunately, like most of Kuti’s singles, “Shenshema” isn’t an easy record to find. Boutique labels have picked up the fallen standard of this once-and-future king, and a proper compilation of his singles (excised from the exhaustive 27-disc Complete Works) is long overdue.