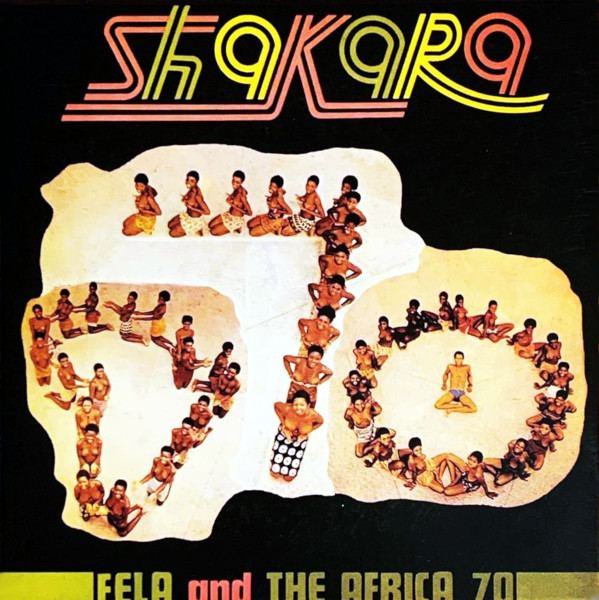 Fela and a slightly retooled Africa 70 continue to refine their Afrobeat sound, this time with a pro-machismo, anti-braggadocio agenda.

Kronomyth 6.0: Lady, and too much protesting.

This is the followup to Open & Close. I think. I’ve long since abandoned any hope of making sense of Fela Kuti’s discography. I’ve seen release dates of 1971, 1972 and 1974 for this album. Apparently, I’ve been able to rule out 1973, which is a small mercy. 1972 makes the most sense, as this follows the two-guitar lineup premiered (?) on Open & Close, a period that arguably marked the beginning of his best music.

Shakara does not contain his best music. At least in my opinion, and I think we all know what that’s worth where Afrobeat is concerned. The album contains two songs, clocking in at just under thirty minutes total, which is probably how long it took Fela to write them. I’m not saying they’re not good songs, but the Africa 70 at this point was a finely-tuned machine that only needed a couple of cranks to get started. This, even with the continually shifting lineup, which now included Tommy James on bass guitar, Segun Edo on tenor guitar and Daniel Koranteg on second conga.

Lady is the better of the two tracks, at least from a musical standpoint. It starts with a simple and mournful melody that sharpens once the guitars come in, with the horn section taking on a more complex role in the arrangement. Kuti has never been one of the great piano players to my mind, but a method emerges in his stylized playing here that provides an important foundation to the music being made, not unlike the way that Miles Davis used to shift things slightly with a few notes and change the shape of the music. Longtime Africa 70 member Igo Chico gets a nice cameo here and on the other side too, and could be considered the group’s “star” member at this point.

Six minutes into the song, unfortunately, Fela opens his mouth. “Lady,” it turns out, is a rejection of modern feminism and equal rights. This was, after all, a man for whom “women’s liberation” meant going topless without a bra. I’m not labeling him a misogynist, since the sexual dynamics in America and Africa are very different, merely pointing out that you may not want to pattern your interpersonal relationships on a man who seemed to spend an inordinate amount of time strutting around half-naked women in a speedo.

Shakara Oloje follows the familiar format of building up a mesmerizing groove before the vocalist appears, although this groove is less mesmerizing than others. Fela’s target this time is the braggart, a man of all talk and no action, which I think we can collectively agree is a target more deserving of derision than emancipated women. “Shakara Oloje” and “Lady” are typical of Fela’s style at this stage: an extended performance that starts with a single, simple motif before being twisted into a more complex, rhythmic motif, and eventually yielding to Fela’s political/social commentary. The rhythm guitars become part of the broader percussion, the bass gives the songs a sense of motion, the horns drive the melody (which a brief break for a tenor saxophone solo) and the electric piano adds splashes of color to the whole mixture.

His next album, Roforofo Fight, represents this style better. Open & Close is more of a transitional work between the two styles, while Shakara marks a full foray into the “new” Fela Kuti sound that better balanced the electric instruments (guitars, bass) with a slightly smaller horn and percussion section. This is the beginning of the modern Afrobeat sound, although there are still jazz references in the music, which has occasioned more than one person to draw similarities between Fela and America’s jazz visionaries. Just as not every Miles Davis album is essential, I’m not sure I’d call Shakara an essential album. It is, however, an important one in the sense that it shows Fela Kuti and The Africa ’70 shaping their Afrobeat sound into the triumphs to come.