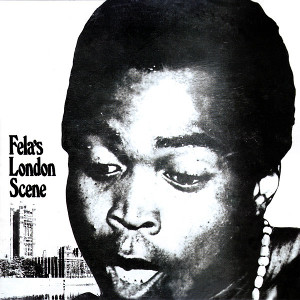 Fela had studied music at Trinity College in London and, more than a decade later, returned to the scene of the crime to record an album in the legendary Abbey Road Studios. Fela’s London Scene is one of the earliest recorded examples of Fela’s groovy Afro beat: a hypnotic and pulsating mass of rhythm, guitar and horns with Fela’s taunting vocals and explosive Hammond organ atop it all. Fela’s music is an unusual act of assimilation, absorbing the music of James Brown and Miles Davis and transplanting it in native African soil. There are certainly elements of jazz in the horn arrangements, a heavy dose of R&B/soul in the electric instrumentation and a deep debt to African music in the polyrhythms, chord changes and pidgin English. This is really Fela’s scene; no one else was making music like this in 1971. Recorded in the studio but presented as a live performance, warts and all, Fela’s London Scene gets off to a great start with the opening “J’Ehin-J’Ehin.” Changing the flow in midstream, Kuti shows himself to be a musical manipulator on a par with Miles, directing monumental shifts in sound with a mere touch. “E Gbe Mi O,” which is said to feature an uncredited Ginger Baker on drums (don’t bother, you can barely hear him) is the album’s highlight and includes a sublime chorus at the end that any jazz composer would envy. The remaining tracks ply the same afrobeat style, punctuated by solos from the sax and organ. Interestingly, Kuti approaches the organ as a horn, combining clusters of notes in short bursts and often battling the melody in direct confrontation. “Buy Africa” and “Fight To Finish” close the record out with calls for political/social change, all against a powerful backdrop of groovy beats and killer horns. Fela’s music has a vitality, energy and purpose unique in the annals of history. Fela’s London Scene is an auspicious start, although the consistency and frequency of his output doesn’t lend itself to touting one album over another. This and the subsequent live record (featuring Baker in a bigger role) are of a piece, although Fela fans may find Baker an unnecessary distraction.