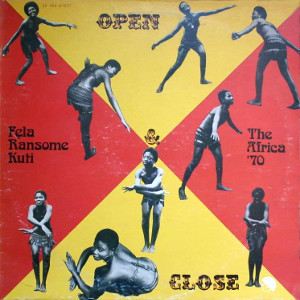 Kronomyth 5.0: Two guitars are better than one.

Open & Close isn’t Fela’s most politically or socially pointed album, but it is an important landmark in the development of Afrobeat, as it marks the first time that Africa ’70 would feature two electric guitarists: a rhythm guitarist (Tutu Srunmu) and a tenor guitarist (Ohiri Akigbe). The dual-guitar sound helped crystallize the hypnotic groove that Fela had been after in his music. Sometimes, the guitars functioned as percussion, other times as melodic patterns. With richer contrast in the foundational musical pattern, Fela was free to add his distinctively loose electric piano and killer horn section.

The title track, “Open & Close,” is ostensibly about a new dance of the same name, but which more likely has social or political significance for Fela. It’s an immediate (and welcome) departure from his previous elpee, Na Poi, looking forward to brighter musical vistas. “Swegbe and Pako,” delivered here in two parts, takes a swipe at people who don’t do their jobs well (the swegbes) and commends those who do (the pakos). For me, this is the album’s highlight, presenting the groove initially in a slowed-down version and then masterfully moving the parts around to create a slightly faster hypnotic groove from its parts.

The genius of Fela Kuti, or part of his genius anyway, was the ability to shift arrangements like a kaleidoscope so that hidden elements were revealed, creating new shapes and sounds in the process. The closing “Gbagada Gbagada Gbogodo Gbogodo” is the only overtly political track, recounting a military uprising against colonial rule, but even here the mood is upbeat and light on its feet. With his tightest lineup yet, Fela was boldly moving in a new musical direction that would influence the world. The only knock I have on this recording is Kuti’s electric piano, which I would describe as notes being mashed together by a man wearing mittens and recorded through a blown speaker. Given how remarkably tight his backing band is, Kuti’s sloppy piano performances are occasionally cringeworthy.

All music composed and arranged by Fela Ransome-Kuti.