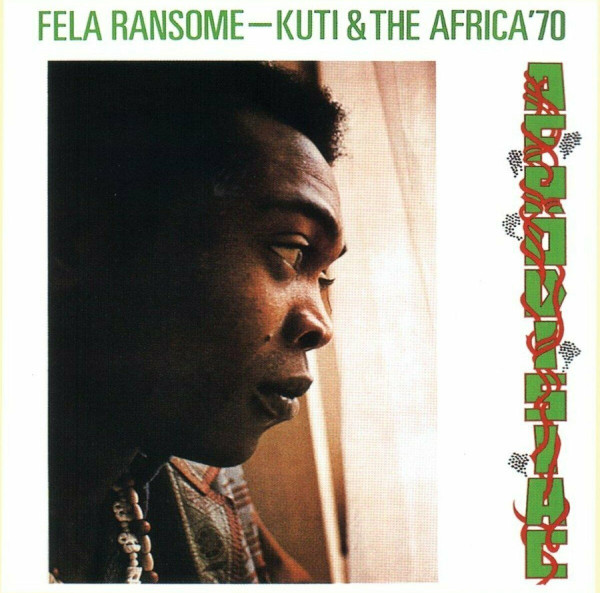 Recorded in Abbey Road Studios in London in 1971, this features re-recordings of some of Fela’s recent homeland hits.

In 1971, Fela Kuti had a pair of local hit singles with “Chop And Quench” and “Don’t Gag Me,” the latter his most overtly political song to date. That same year, Kuti and his Afrika ’70 band travelled to London’s Abbey Road Studio to record new material, and used the occasion to re-record some of his recent hits. The following year (or two), the new recordings of “Chop And Quench” and “Don’t Gag Me” were released with “Eko Ile” and “Alu Jon Jonki Jon” (from the same Abbey Road sessions) as Afrodisiac.

On first listen, it sounds as though Fela has taken a step back from the stunning double-guitar attack of Roforofo Fight but, like I said, this music was actually recorded with the earlier lineup—Peter Animashaun on rhythm guitar, Maurice Ekpo on bass, Igo Chico on tenor sax, etc. Thus, Afrodisiac sounds a lot like the music recorded during the same period: Fela’s London Scene and Live! Churning grooves and exotic, multi-layered rhythms underpin Fela’s musical/verbal commentary on gluttony (“Chop And Quench”), selfishness (“Alu Jon Jonki Jon”), home (“Eko Ile”) and free speech (“Don’t Gag Me”). As usual, Afrika’ 70 shines when Fela steps out of the spotlight, although for most of the album his voice and electric piano are front and center.

If you were to create a best-of compilation of the early Afrika ’70 lineup, you’d probably want to include these versions of “Don’t Gag Me” and “Chop And Quench.” All of the early Fela/Afrika ’70 albums contain great playing, powerful grooves and passionate performances from Fela, so I wouldn’t recommend one album over another. In terms of musical development, you’ll hear the emergence of the electric guitar on “Eko Ile” as well as the group’s unique twist of presenting an opening groove and then quickly inverting it into something unexpected and wonderful. Yeah, add “Eko Ile” to that best-of stew too.

The truth is that most Fela albums more or less contain the same ideas. They’re parts of a larger whole, like paragraphs from different chapters in a long dissertation on afrobeat. What Fela had learned in the 60s is expertly applied in his music from the 70s; in a sense, the one period represents creation, the other application. Never one to sit still, Fela was already applying new ideas to afrobeat in 1972 when Afrodisiac was released, but the smell of vintage Fela will be enough to lure listeners out of time’s narrow corridors for a moment.

All titles composed by Fela-Ransome Kuti.