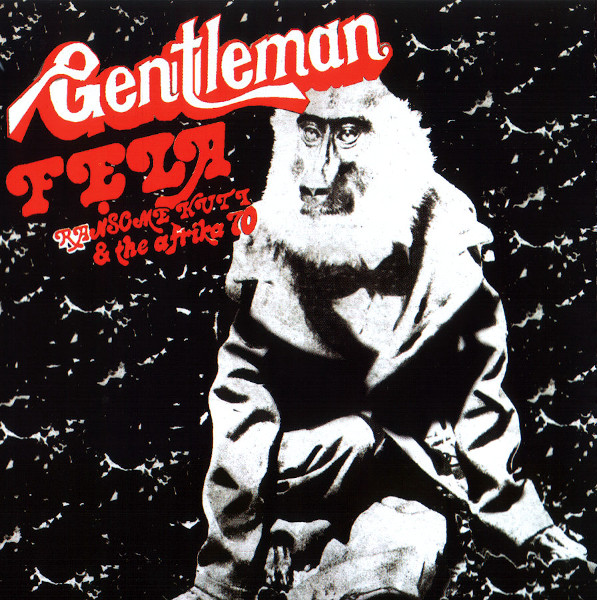 Generally regarded as one of Fela’s best albums, this mixes Afrobeat with a pronounced jazz feel.

Critiquing the work of Fela Kuti is a job for a wiser scribe than me. In the absence of knowledge, I’m not even sure of the chronological order of his recordings, let alone who plays what. And, of course, the fact that many of the lyrics are in Yorumba, a language I clearly don’t understand, doesn’t help. So, for our mutual un-edification (confusion), I present yet another album review written by someone who doesn’t know or understand anything.

Gentleman is generally regarded as one of Fela’s best albums, by people who presumably know more about these things than I do. It brings his jazz sensibilities to the fore, including what I’ve read is Kuti’s taking over of the tenor sax responsibilities from the departing Igo Chico on the title track, Gentleman. Chico is credited on the other two tracks, so it’s possible that the opening tenor sax solo (or what I’m assuming is the tenor sax) is played by Kuti, although the voice in between the blowing doesn’t sound like his, so who knows? (Not I.) Regardless of who plays what, “Gentleman” is a rich stew of Afrobeat and jazz that feels heavier than past albums like Roforofo Fight. Kuti doesn’t sing for the first eight minutes, and even then he seems ambivalent about it. The lyrics are typically Afrocentric, as Fela takes aim at countrymen who dress like gentlemen rather than Africans. (The earlier “Shenshema” addressed a similar theme.)

Igbe (Na Shit) features a few lines in Yorumba repeated (“Igbe” can be translated as “crying”) and again feels heavy and brooding where earlier albums seemed to be headed in a lighter direction. Maybe serious is the better word, as Kuti seems to be taking the music and its connection to jazz more seriously on Gentleman. Levity returns, at least in the bass and guitar interplay, on Fe Fe Ne Eye Fe, which Fela introduces as based on a local proverb about woman’s vanity. The horn arrangements again seem almost brash in contrast to the rest of the instruments, as though the horn amps were turned up to eleven (I’m kidding about the horn amps).

The difference between this and his last album is the emphasis on the horns and the heaviness of the arrangements. Personally, I miss the rhythm and tenor guitar interplay of the past, even as I appreciate the fact that Kuti tones down his emcee persona in favor of playing sax and electric piano. He was a very good musician if not exactly a perfectionist, and it’s nice to hear him shift the spotlight from his singing to his playing. Also, there is the sense that Fela was getting back in touch with his jazz roots on this record, although Afrobeat is still the foundation for everything. If I don’t regard Gentleman as one of his best albums, it’s only because I have so much further to go and so much more to know.

All songs arranged and composed by Fela Ransome Kuti.