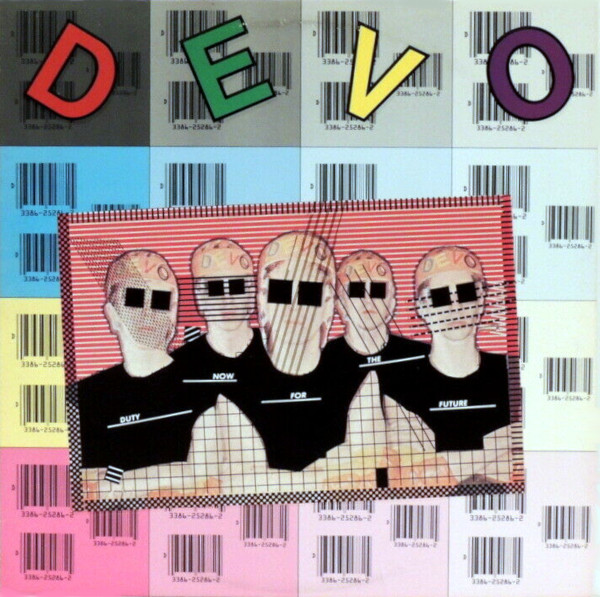 Step around the duty and you’ll find half a brilliant album hiding on Devo’s followup to Q&A.

Devo’s second album features a handful (wow, even that word seems sexually charged) of classic songs from their early canon, including a few (“Clockout,” “Blockhead,” “Smart Patrol/Mr. DNA”) that date from their pre-Q&A days. Now, you might take the appearance of old leftovers and two instrumental tracks as a sign that the Devo juggernaut was running low on spud power, so let me mash those misgivings: Duty Now For The Future is brilliant. Some of the time. Not all of the time, like their first album, but most of the time. Okay, “Secret Agent Man” is also an unsatisfying followup to “Satisfaction.” I guess I have a few misgivings myself.

Realistically, there was no way that DNFTF was going to be as good as their first album. They had years to write the material for Q: Are We Not Men? and only one measly year to concoct its followup. As for the absence of Brian Eno, Devo’s sound was so distinctive and their vision so precalculated that I don’t hear an audible difference in production between their first and second album. Freedom of Choice was, of course, a very different album than the first two, but that’s a tale for another day. You can hear the manic replaced by the mechanical on a few cuts (“Triumph of the Will,” “Strange Pursuit”), but sexual tension and social devolution rulz the day for most of the way.

DNFTF starts in peculiar fashion with a brief instrumental anthem, a sort of “Here Comes Frankenstein’s Bride” for the devolved debutantes. Any notion that the new album is going to be synthetic nonsense is quickly dispelled, however, with the all-out assault of “Clockout.” Devo doesn’t deliver another knockout until “Blockhead,” like “Clockout” a holdover from their early days. “S.I.B. (Swelling Itching Brain)” closes the first side with the album’s first new wonder. If you didn’t know better, Devo had just delivered three great, new songs in the first fifteen minutes. Yet, in hindsight, the band’s devolution was accelerating at an alarming pace.

Side two is a different story. “Pink Pussycat” and “The Day My Baby Gave Me A Surprize (one of my favorite Devo songs) are spudtastic creations, and the addition of “Smart Patrol/Mr. DNA” (again unbeknownst to most listeners a leftover from the past) ends the album on a surging wave of strange and delicious energies. Sexuality continues to play an important role in their music. “Pink Pussycat,” “Red Eye” and “Triumph of the Will” are driven by deviant sexual energy; “Penetration In The Centrefold” (included as a bonus track on the 1994 remasters) even moreso. It’s one of life’s little ironies that the band got away with writing so many pornographic songs only to be called out for promoting sexual deviation the one time they weren’t (“Whip It”).

Al in all, DNFTF continues the roller-coaster ride, even if a few of the thrills are from the past. It does introduce the concept of Devo filler, something that simply didn’t exist on the first album, but would make its ugly appearance on most Devo albums from now on except maybe New Traditionalists. You get to hear half a great album and Bob Mothersbaugh sing (on “Secret Agent Man”), so it’s your Devo duty to buy this album eventually.