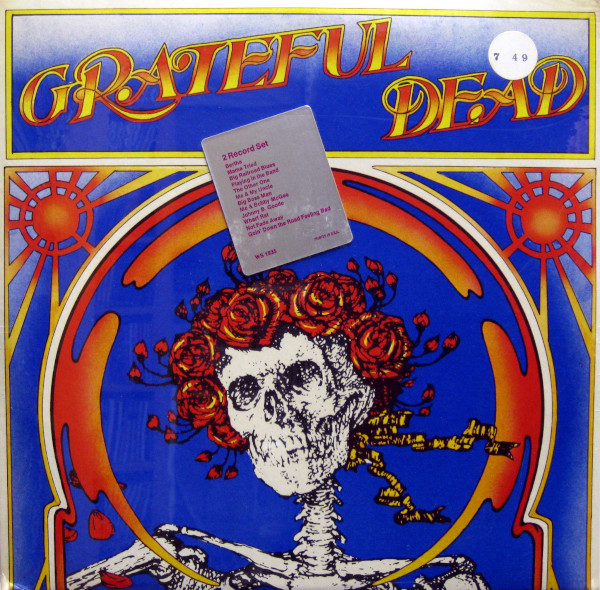 The Dead’s two best albums are bookended by double live albums. This is the other one.

I was thirteen years old and my musical world consisted of David Bowie, Elton John, Iggy Pop and Elvis Costello. So what did my well-meaning parents do but buy me a baseball tee shirt featuring the skull & roses artwork on the front. I didn’t just dislike Grateful Dead at that point in my life, I loathed them. But, dammit, that tee shirt fit well, so I ended up trading comfort on the outside for comfort on the inside. In their defense, I don’t think my parents knew that the image had anything to do with the Dead. I was born on Halloween and into horror movies, so skeletons seemed like a safe bet to them. Teenagers are difficult to buy for, anyway.

Forty years later, here I am listening to Grateful Dead remembering why I didn’t like the Dead in the first place. The aimless jamming, too few originals and too many cover songs—it’s all here. Live/Dead was a revelation, a resurrection. Grateful Dead is a runaround. It teases you with a few originals that have since become the stuff of legend: “Wharf Rat,” “Playing In The Band,” “Bertha.” I would tell you that “Bertha” is a bore, but there’s no getting around the other ones—they’re classics in the canon. “Wharf Rat” is amazing, but it’s also one of the few tracks that gives the band enough time to develop ideas, clocking in at almost nine minutes. Many of the songs on here run between three and five minutes, which is about when you should be getting into a Dead song, not out of it.

The other knock on Grateful Dead is the audible absence of Pig Pen. He gets one vocal lead, on the disappointing “Big Boss Man,” and his organ playing is buried in the mix or, in the case of the three new original tracks, replaced altogether by Merl Saunders. Certainly, Bob Weir could have sung one less track, no? I like Bob Weir’s voice, but he was my third-favorite singer in the band. Here, he gets half the vocals, which means you get a lot of cover tunes: “Me & Bobby McGee,” “Me & My Uncle,” “Mama Tried,” “Johnny B. Goode.” Maybe that’s exactly what you tuned in for, particularly if you’d caught their live show over the last couple of years, but I would have rather heard something/anything from their last two albums instead of Chuck Berry and Buddy Holly songs that I’ve already heard a million times before.

There are, not surprisingly, a lot of people who have fond memories of this album. It sold well, arriving as it did on the heels of Workingman’s Dead and American Beauty, and there’s certainly joy to be had in hearing Billy Kreutzmann, Phil Lesh and Jerry Garcia improvise. The side-long version of “The Other One” is often cited as a highlight, but I’ll take “Turn On Your Lovelight,” thank you very much. If Dead fans possessed a critical eye, and I’m pretty sure they don’t, they would admit that Grateful Dead isn’t the proper place to enter the world of the live Dead. For that, you’d want to start with Live/Dead, then move on to Bear’s Choice. Then again, you may not give a shirt what I think about the Dead, and that’s fine too.

Released on 2LP on September 24, 1971 in the US (Warner Bros., 2WS-1935) and Japan (Warner Bros., P-5042W) with gatefold cover; reached #25 on the US charts (RIAA-certified gold record). Versions made for the RCA Music Club were apparently printed using the old Warner Bros./Seven Arts label.