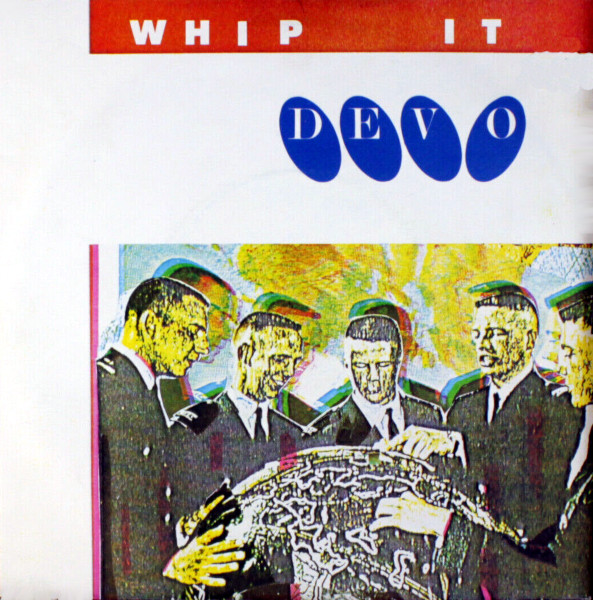 The Devo single that introduced the spudboys to a bewildered world of jocko-homos.

Kronomyth 3.2: The power of positive spanking.

I winced every time I saw VH1 trot out its One-Hit Wonders show, knowing that Devo’s name was on the roll call. Or maybe it was because William Shatner was out of uniform. If this is how most people remember Devo, then we’re doomed to repeat the mistakes of the past.

You can’t fault the video or the song, since both are in line with Devo’s audio/visual revolution. Yet the two seem to speak to different songs: the audio component conjures positive thinking taken to a primitive conclusion, while the video is a misogynistic nightmare. The single sold over 500,000 copies in the US alone, and I doubt all but a handful of them fell into knowledgeable hands.

The B side is “Turn Around,” a nonalbum track that admonishes us to step outside and take a good look at ourselves. It’s got a slightly punk edge, which Nirvana seized upon for an unexpected cover on Insecticide. That’s right, a song that wasn’t good enough to make it onto a Devo album was deemed good enough to end up on a Nirvana album. Get over it.

Original 7-inch single version (UK/GER)
A1. Whip It
B1. Snowball