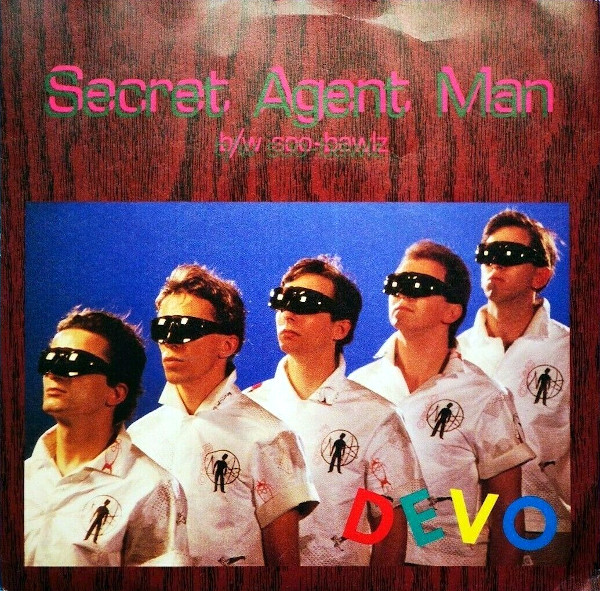 Devo are men on a mission to expose the cavities of evil in this demented version of the Johnny Rivers hit.

Kronomyth 2.2: Security clearance (I can’t get no).

Devo’s mutated cover version of Secret Agent Man, a song popularized by Johnny Rivers in 1966, has its origins in the band’s mid-Seventies performances. A more polished version appeared on the band’s second album, Duty Now for the Future, and was released as a single in what was probably an attempt on the label’s part to duplicate the success of “Satisfaction.” While it’s more “Rock Lobster” than Rolling Stones, it’s not a bad song. I liked it when I first heard it in 1979, but I tend to hear it just as a novelty these days.

It’s worth noting that the lyrics on Devo’s version differ almost completely from the original lyrics. Mark Mothersbaugh appears to be responsible for the new arrangement and lyrics, although it’s actually his brother, Bob Mothersbaugh, who sings the lead vocals. The labels paired up various songs on the B sides: in the U.S., it was the album track Red Eye, in Japan, The Day My Baby Gave Me a Surprize (Japan wins) and, in the UK, the nonalbum track Soo-Bawlz made its first official appearance. All three Bs are manic numbers with sexual innuendo, and these days you can find all three on the expanded edition of Duty Now for the Future.