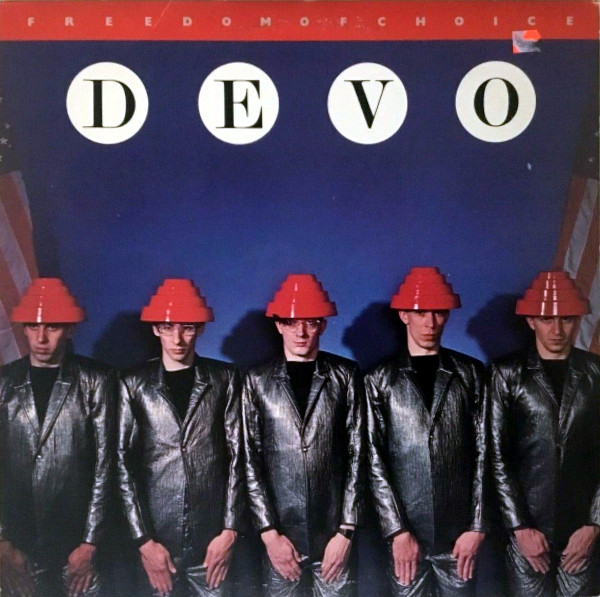 Rock and roll isn’t dead on Devo’s third album, it’s just been assimilated by the Borg.

(I), O (O), U… an apology for my first review of Freedom of Choice. The record always sounded mechanical to me. But then it clicked: this was the robot revolution we’d been warned about. It was Buddy Hologram and Roy Orbitron singing about picking up chicks and putting down the human race. Yes, it’s a cold record, but Devo wants you to make the chilling discovery that you and rock & roll are dead. No more hugs and kisses; Devo has distilled the chemical that makes you feel loved and they’re shooting it directly into your veins through a tiny steel tube.

On the opening “Girl U Want,” desire is a malfunction (compare this to “Uncontrollable Urge”). “It’s Not Right” and “Ton O’ Luv” are songs about strong emotions that have been completely stripped of emotion. As I said, pretty deep stuff, and I’m surprised I missed that on the first go ‘round. Then there are the crazed pop songs that channel Devo’s inner monkey: “Freedom of Choice,” “Whip It,” “Mr. B’s Ballroom.” Fun stuff from a band that could write a good guitar hook when they weren’t busy putting one in your mouth. There are a few cold tracks that go nowhere (a harbinger of Oh No! It’s Devo), but a good half of Freedom is classic Devo.

As for the silly flower pots, forget ‘em. Devo was planting the seeds of revolution with their music not their fashion. Freedom of Choice does sound mechanical, but that’s the whole idea. This is revolution without a trace of emotion, where slogans are simply passwords to a preprogrammed response. Not the kind of stuff to whip you into a frenzy on the first listen, but over time it does have a snowball effect.