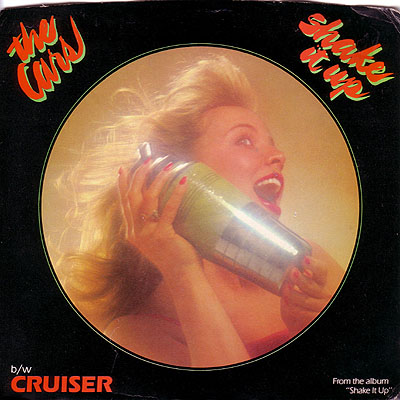 More “Let’s Go” than “Touch And Go,” the first single from The Cars’ fourth is a party on a platter.

Kronomyth 4.1: The Cars in (cruise) control.

After a string of platinum albums, The Cars weren’t about to shake things up too much, finetuning the hitmaking formula for the effervescent “Shake It Up.” A playful video featuring the band on a night out picking up various strangers who turn out to be (surprise!) beautiful models was appreciably novel (if predictably shallow) in 1981. Ric Ocasek remains cool throughout, Elliot Easton plays a pink guitar (which I’ve read was Benjamin Orr’s idea), David Robinson wears a pink sportscoat, and the viewer gets the general impression that it’s good to be a rock star, which I suppose is how the musicmaker machinery works.

Listening to this song (or most Cars songs, really), it occurs to me that they may have been the last of the great glam rock bands. I say that because The Cars grabbed whole sections of their strategy from the glam operator’s manual: keep it stylish, keep it moving, make it sequined but with the shadow of darker substance. If that sounds like a stretch, remember that Ocasek was actually older than Marc Bolan. Sadly-strangely, Bolan’s career (and life) ended before The Cars’ began. In idle moments I’ve sometimes wondered whether the industry slots new acts into old shoes or if their might be supernatural forces at work, a sort of musical talisman handed off in secret under saturnine circumstances, but my crouching tigers are mostly motes of dust.

In honor of longstanding tradition, the labels selected what is arguably the album’s least interesting track, “Cruiser,” for the flip side of the first single. (It didn’t stop The Cars from getting mileage out of the song in their live shows.) Sung by Benjamin Orr, it’s a dark, relentless song about a midnight cruise. In an odd twist, you could probably superimpose this song over the “Shake It Up” video (for three minutes, anyway) and get a much difference experience. The lyrics are a perfect balance of sequins and shadows; perhaps chosen for a deeper meaning, likely selected because they sound menacing. Orr gives it a good effort, but I’d have rather heard Ocasek sing this one since it’s more aligned with his vampiric persona.