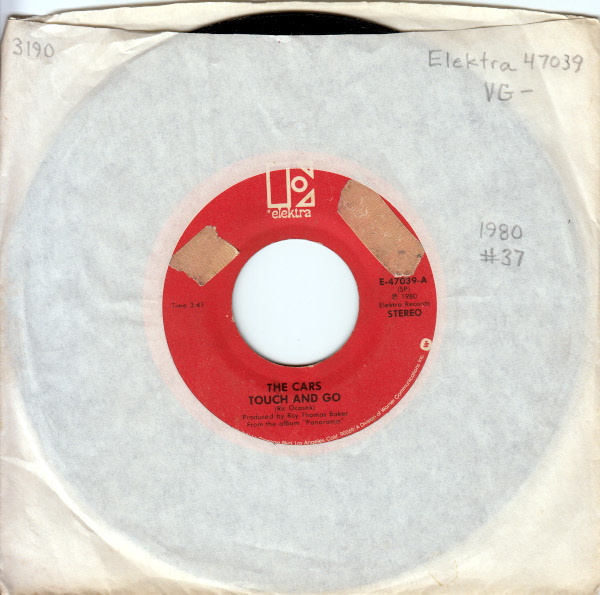 A little engine stutter aside, this is one of the catchiest tracks on The Cars’ most “difficult” album.

Panorama was the first Cars album that sounded like it had been written for the studio rather than the concert stage. “Touch And Go” captured the mood of the new album perfectly: great tune, but you’d break your hip dancing to it. The synthesizers were more pronounced on Panorama, the guitar solos almost seemed cartoonish, and you had the sense you were listening to a caricature of The Cars. Don’t get me wrong, I love “Touch And Go,” and the album’s arrangement captures the song’s intent in brilliant fashion, but I also realized that it was a bit of a gamble for the band. As a concession to commercial consumption, an edited version of the song was released as the single, cutting off about a minute of the long ending. Oh, and for those who delight in mondegreens, I always thought the line “Just like the hush of midnight” was “Just like a show midnight.”

“Down Boys” is one of Benjamin Orr’s turns at the microphone, although it’s not one of the album’s stronger tracks. It reminds me of Iggy Pop’s music from the 80s only, you know, Iggy would have shoved it in your face more. Orr gives it a cold read through, recognizing perhaps that the fate of The Cars’ future didn’t rest on whether or not he nailed this song. The version presented here is identical to the album track and, honestly, is one of the less interesting songs from Panorama.