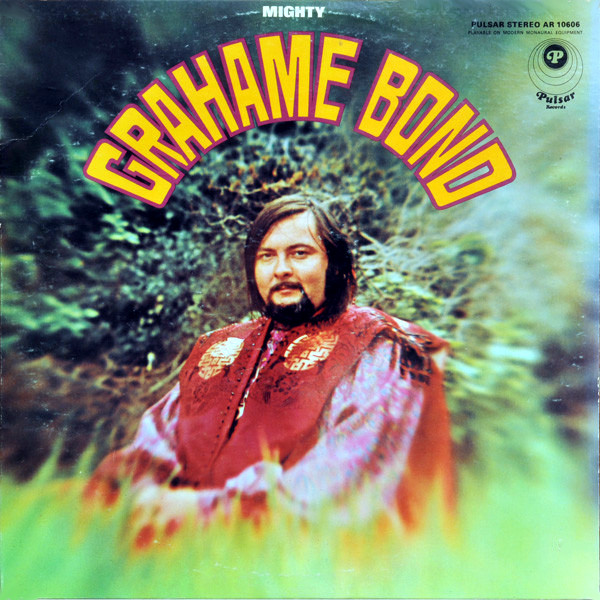 More mystical blues-rock originals featuring some of the hottest organ playing this side of The Doors.

Despite what appear to have been some duplicitous dealings by Pulsar, Grahame Bond recorded a second album of originals for the label, this time featuring a full backing band that included Harvey Mandel on guitar and Harvey Brooks on bass. As with Love Is The Law before it, Mighty Grahame Bond showed that the creative fire in Bond hadn’t been extinguished yet. The songs downplay Bond’s extracurricular occult interests (an Egyptian mantra in “Freaky Beak” notwithstanding) and focus instead on the superlative organ playing and passionate vocals of their larger-than-life creator (still spelled as Grahame with a “e” while the songs were once again credited to the pseudonymous Billy Gamble).

The music on Mighty Grahame Bond sits somewhere between psychedelic blues rock and the baroque. Bond is a true original, but shadows of contemporary acts such as The Doors (“Pictures In The Fire”) and Procol Harum (“Walk Onto Me”) can be glimpsed, which could be coincidental or a taste of the commercial creeping into Bond’s music. Although nothing on here would be considered classic Graham Bond (an admittedly narrow field), “Water, Water,” “Oh Shining One” and the proggy “Baroque” are good examples of Bond at his better, if not his best. The accompaniment from Mandel, Brooks, Eddie Hoh and Drachen Theaker is as solid as you would expect, not that you expected Bond to acquire a band this good as an American exile on Pulsar’s dime.

While it’s not a bad record at all, Bond’s declining mental health and fortunes weren’t conducive to greatness. The man who scared the bejeezus out of me singing Willie Dixon’s “Hoochie Coochie” isn’t so scary at all on “Stiffnecked Chicken” or “Freaky Beak,” but seems rather like a strange, harmless pervert. The blues walks of “Magic Mojo,” “Sisters and Brothers” and its twin, “Brothers and Sisters,” are pedestrian, the sort of music that any professional organist might conjure. Honestly, everything since The Sound of 65 has been a slight disappointment to me, as though the contract with the crooked man only stipulated one great album plus a bedazzled array of also-rans. Bond fans will enjoy hearing their hero bring his B game to the studio with a good backing band, but there’s something seedy about these Pulsar records that diminishes both the man and his music.

All songs written and arranged by Grahame Bond. For licensing reasons, the songwriting was credited to Billy Gamble, an alias for Bond.