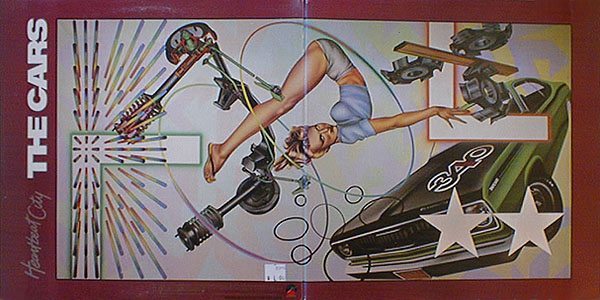 Mutt Lange works his multiplatinum magic again as The Cars release the most sucksassfull album of their carears. (I’ll spellcheck that later.)

Mutt the hell?! That was my initial reaction to this record, although I hadn’t heard Beatitude yet so I was still expecting the chaser to Shake It Up. Mutt Lange was probably the hottest producer on the planet at this point, having helmed Back In Black, Foreigner’s 4 and Pyromania. The resulting record was exquisitely fussed over, hugely successful and soulless down its back-in-the-black beating heart.

I didn’t think it was possible for a band as popular as The Cars to sell out, but (hello again) it happens on Heartbeat City. Yes, the record includes “Magic,” “Drive” and “You Might Think,” three songs that rank right along with the band’s better ideas. But The Cars’ engine trouble began with Beatitude. Then again, I seem to be in the minority on this one (in the minority of middle-aged music bloggers with autism, anyway, which would describe the majority of us). An AMG reviewer found in “Looking For Love” a should-have-been hit of “breezy pop,” for example. Me, I’d have to be standing in a desert for an awfully long time before I thought that. (The same reviewer goes on to call “Why Can’t I Have You” a “moderately paced love song,” which is the least you can say about a song and still say something.)

The shift to synthesizer band is nearly complete under Lange’s direction; there’s hardly enough in these arrangements to keep one guitarist busy let alone two. While the music takes a backseat, The Cars did seize on the music video format to release a handful of interesting videos, three of which landed in MTV’s Top 20 videos of 1984. Among these was the video for “Drive,” which almost single-handedly fed the demand for a Benjamin Orr solo album (The Lace, released in 1986). I also recall reading somewhere that Ric Ocasek met his supermodel wife on the set of one of their videos (they must have been shooting at night).

Ultimately, Heartbeat City is more caricature than Cars. It’s the band the way the rest of the world saw them, and not the way the people who listened to “Moving in Stereo” on headphones a hundred times (i.e., their original fans) heard them. Then again, bands must be sick to death of inflexible loyalists who defend a Panorama and then pan a Heartbeat City. The idea of handing Lange the keys to The Cars is an interesting, even a bold, move. And better to celebrate the success of Heartbeat City with the world than commiserate with the wounded over Beatitude.

All songs written by Ric Ocasek unless noted.
* Cassette version lists A5 as “Stranger Eyes” and B5 as “Jacki.”