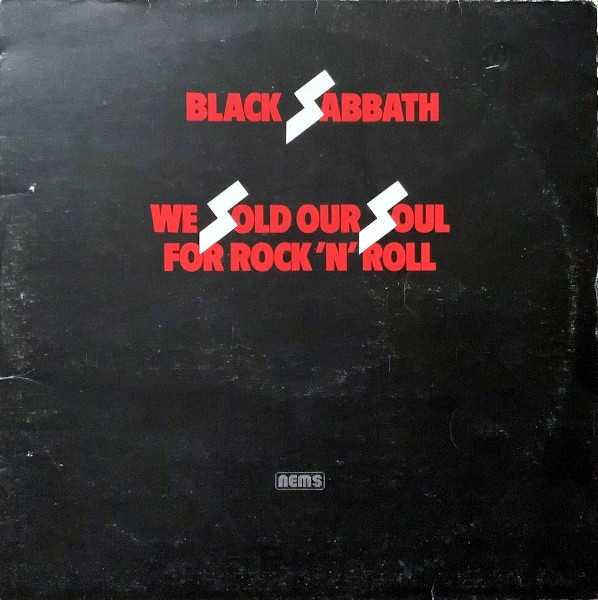 A double elpee-ing of Sabbath’s greatest songs released in the witching hour between blackness and blandness.

Ninety minutes of Black Sabbath’s best music, which may not be worth your immortal soul, but fifteen dollars seems like a bargain. We Sold Our Soul for Rock ‘n’ Roll plays out as a master class of heavy metal even as it plays into the hands of critics who felt that Sabbath were Satan worshippers. Fans will get the tongue-in-cheek title, of course. What they won’t get is something they don’t already own. The album faithfully pulls album cuts from the first five classics; no unreleased tracks, no live versions, although depending on your country of origin you might not own a copy of Wicked World, which appeared only on the later US release of Black Sabbath.

You could make a case that the songs of Sabbath Bloody Sabbath and Sabotage are slighted. You could also just buy those albums and quit being a baby. Obviously, you’re not going to agree with every selection here. Is Warning worth ten minutes of real estate? Do we really need four songs from Vol. 4? The fact is that 90 minutes isn’t enough time to cover all the great music that Sabbath had made up to this point.

Where you won’t get any pushback is on the timing of this album. Never Say Die and Technical Ecstasy were technically not the best of Black Sabbath by a longshot. Everything important that the band had to say had already been said by the time We Sold Our Soul for Rock ‘n’ Roll was released. As one minor complaint before I go, the packaging is a bit underwhelming: no innersleeves, no pictures of the band. I’m not saying the inner gatefold had to feature a pop-up of Ozzy biting the head off a bat, but something that played off the whole “sold our soul” thing would have been appreciably clever.

All songs written by Black Sabbath unless noted.