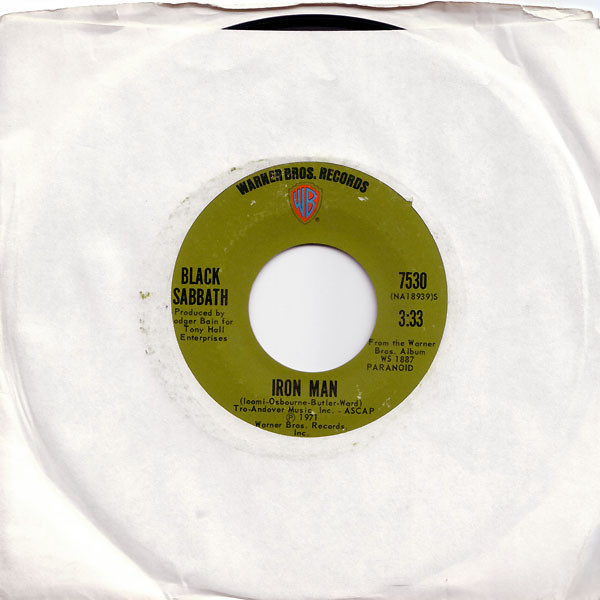 Now the time was here for Iron Man to spread fear, at least in the US and Canada.

Run, run, run! The colossal Iron Man approaches, promising an Electric Funeral for all left in his wake. This terrifying pair of songs slept for over a year, only to awaken more than a year later during the peak of Black Sabbath’s assault on the charts (they had three albums in the US Top 200). The single version of “Iron Man” was trimmed by more than two minutes; the intro and first guitar solo are edited, a verse is cut out and the ending jam is completely removed. Not so much a reassembly as the tightening of some loose nuts and bolts.

The flip side is “Electric Funeral” from the same album, Paranoid. I’m not sure what occasioned the nostalgic trip back by Warner Bros., since it wasn’t like “Sweet Leaf” would have made for a terrible single. The delayed single itself is a fairly rare phenomenon. Elton John‘s “Your Song” and Todd Rundgren’s “Hello It’s Me” come to mind (and now are being completely crushed by Iron Man’s mighty boots in my mind). Although VH1 wasn’t exactly a haven for heavy metal, they did rank “Iron Man” at the top of their 40 greatest metal songs. “Paranoid” came in at #34. It was a surprisingly good list.