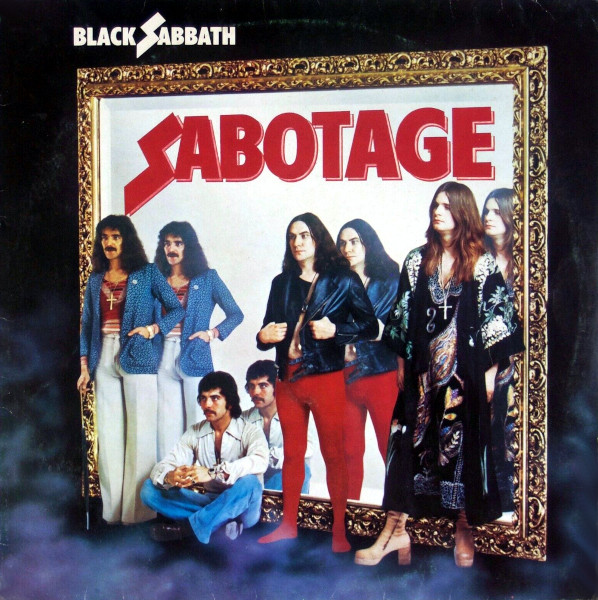 A war with their management and label provides the full metal jacket for Sabbath’s classic sixth metal album.

I was listening to this on a tape cassette when I got into my first car accident. I was driving a Pontiac Firebird, someone pulled out in front of me and BAM!, nothing but the sound of crunching metal. Well, that and the sound that I made when I hit their car, of course.

Sabbath Bloody Sabbath felt like a creative second wind after the deflated fourth. Sabotage is to stand in the hurricane. Hole in the Sky tears the fabric of reality, and for the next forty minutes the listener is flooded with heavy, supernatural metal. On Symptom of the Universe, Black Sabbath even manages to rip a hole in time, ushering in thrash metal nearly a decade before the arrival of Metallica, Slayer and Anthrax.

During the recording of Sabotage, Sabbath was embroiled in legal wranglings with their manager and record company. A classic battle of good and evil, sort of, that spurred the band on to create some of the most epic music of their career. The Writ captures that moment in time for an eternity, from its whispered “rats” to its screaming guitars. In between, the song introduces no less than four separate musical ideas, a fitting indication of the superfluity of creativity that marks Sabotage.

Paranoid and Sabotage are the two Sabbath albums that you can sit through without realizing the passage of time. They suck you in and spit you out, dazed, forty minutes later. Dazzling production effects are part of that magical spell. The tricks occasionally fall flat (e.g., the echoed guitar solo on “Symptom of the Universe”), but more often floor you, like the way the acoustic Don’t Start (Too Late) connects the first two tracks for a breathless beginning.

Although the whole band is credited with songwriting, Sabotage sounds like a fusion of different ideas. Am I Going Insane (Radio), for example, sounds like a psychedelic throwback to the late 60s, which had me thinking Ozzy Osbourne was behind it, while the classical-rock hybrid of Supertzar is likely the brainchild of master spiral architect Tony Iommi. (And that, Rick Wakeman, is how to use a chamber choir on a rock album.) As long as we’re singling out individuals, “Symptom of the Universe” is Bill Ward’s best performance on a Sabbath song, ever.

Almost everything on Sabotage is a classic. Almost. The Thrill of It All seems like a missed opportunity that goes soft in the middle. And I don’t know why Megalomania needed a piano in it, but that song crushes once the cowbell kicks in. Despite not selling as well as previous albums, their sixth is generally regarded today as one of their best. From the standpoint of progressive rock, it’s certainly one of their most rewarding records, although I still wouldn’t call Sabbath a progressive rock band. Better to say there are more elements of fantasy at work in Sabotage, and the whole thing has a fantastical air about it, with an acrid pinch of brimstone in it.

All songs written and arranged by Black Sabbath.