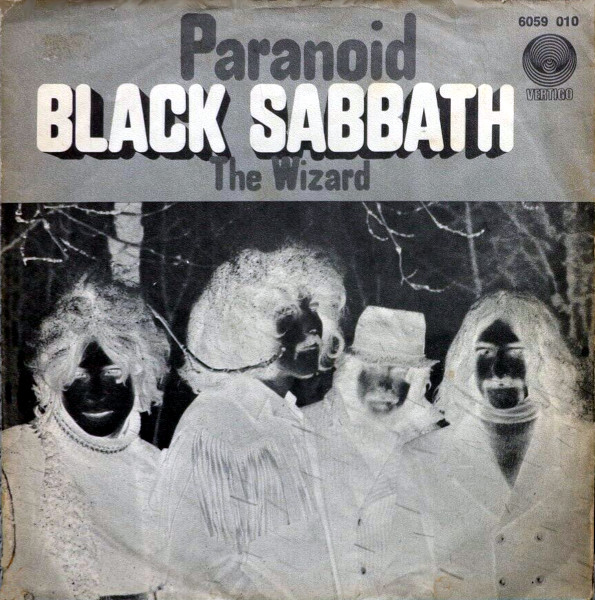 This is the single that made Black Sabbath international stars and set into motion fifty years of head banging (and counting).

This is the single that single-handedly kicked off the heavy metal movement in Europe, the patriarch/progenitor of hundreds of European death metal bands. It may also be the first example of head-banging rock & roll. And, of course, it’s the first single from Black Sabbath’s best album, Paranoid. So many firsts, that the last thing you need is for me to re-hash it all. Either you’ve heard this song a thousand times or you haven’t (in which case, fear not, you’ll have plenty of chances in Hell).

Paranoid is part of a time-honored rock & roll tradition that presents the hero as social outcast: Iron Man, Cinderella Man, 21st Century Schizoid Man, Fool on the Hill. Of course, Sabbath does it darker, without sympathy or the trace of a single tear. It’s a cautionary tale of having crossed the line from sadness to madness, and the burned-out shell-of-a-man singing it sells it.

“We recorded the whole [album] in about two or three days, live in the studio. The song ‘Paranoid’ was written as an afterthought. We basically needed a three-minute filler for the album, and Tony came up with the riff. I quickly did the lyrics, and Ozzy was reading them as he was singing.” — Geezer Butler, as quoted in a 2004 Guitar World article.

For some reason, Vertigo paired “Paranoid” with The Wizard, a track from their first album. It’s another rock & roll archetype (the theme for today, apparently), this time of the supernaturally wise man. (See Tull’s Teacher or Heep’s The Wizard for more examples.) Since we’ve already covered this ground before, I’ll move along to the reissues. In the 70s and onward, “Paranoid” was re-pressed into service on various back-to-back hit singles, so chances are you’ve got one version or another in your singles collection. I have the Warner Bros. reissue from the 1980s, which features the album version of “Iron Man” but incorrectly lists it as the 3:33 single version. You know, that stop watch is water resistant too…