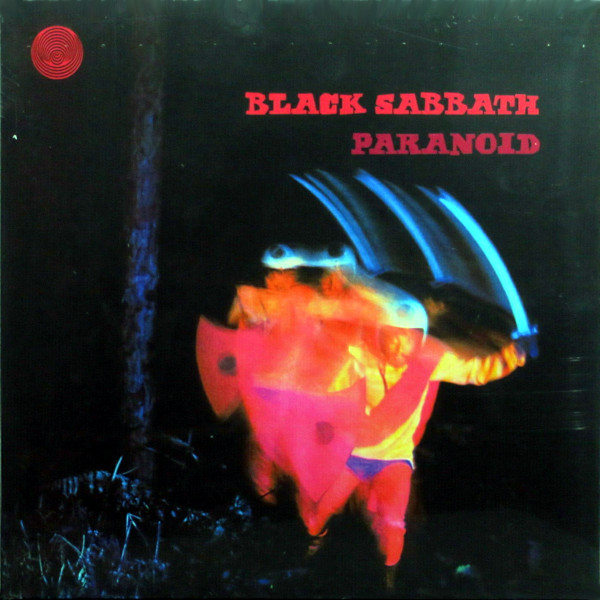 Paranoid. Iron Man. If mankind dies and cockroaches inherit the earth, these songs will still be played… on tiny headphones.

Kronomyth 2.0: Now the time is near for metal men to spread fear.

No church bells this time, but an air siren to warn you of what’s to come. Black Sabbath, their first album, had sometimes steadied itself on the crutches of blues-rock. On Paranoid, they throw away the crutches and run headlong for the cliffs of reason. The band’s second album is, in all ways, a bold step toward establishing their own unique brand of heavy metal. Deep Purple rocked just as hard, and often faster, but if Purple was the speed king, Sabbath was now the undisputed dark lord. (Led Zeppelin was a kind of musical god.)

Legend goes that Black Sabbath recorded Paranoid over the course of a few days, and that the song “Paranoid” was recorded in less than an hour. If the band didn’t worry about getting the performances perfect, they didn’t need to; they had already perfected their sound. Bill Ward’s explosive drumming, Tony Iommi’s supernatural guitar work, Geezer Butler’s burned-out bass and black magic poetry, and Ozzy with a Z’s zombified vocals were recorded by Rodger Bain in a sulfuric haze that distorted the senses in delicious darkness.

The band originally intended to name the album after its first track, War Pigs. The nearly nine-minute epic on the evils of war, like the earlier work of Deep Purple, would seem to straddle the worlds of prog and metal. (In fact, there is some debate as to whether both bands belong in the prog category.) Paranoid, a track that Butler and Osbourne felt was an obvious ripoff of Zeppelin’s “Communication Breakdown” (and, honestly, I still don’t make the connection), is now an acknowledged heavy metal classic. The song encapsulates everything that is great about Sabbath: head-banging riffs, profound sadness and more than a little madness. Planet Caravan is unique in the annals of Sabbath: a dream rendered in nightmare shapes that doesn’t bang a single head, unless you count Bill Ward’s bongoes. It lulls the listener into sleep for the shocking Iron Man. If Paranoid contained nothing but “Paranoid,” “Iron Man” and six songs from Julie Andrews, it would still be the greatest heavy metal album of all time.

The second side doesn’t contain anything as powerful as those two songs. Electric Funeral returns to their blues-rock roots for what many would consider a near-classic Sabbath song. Hand of Doom feels unfinished and fuses parts of different songs together. I’m torn between calling it ambitious and lazy. Rat Salad isn’t a song so much as a pretense for a drum solo, but Ward doesn’t disappoint. The record closes with Fairies Wear Boots, which fortunately rocks harder than it sounds. The song refers to a hallucination while high, as well as perhaps a connection to the supernatural world that others couldn’t see. Probably not the most menacing title in the history of heavy metal.

Despite the short time they spent in the studio, Sanctuary managed to dig up an album’s worth of instrumental and alternate takes for the expanded remasters of Paranoid. None of the tracks really shed any new light on the tracks, except maybe the alternate lyrics for “Planet Caravan.” A three-disc version even resurrects a rare quadrophonic mix of the album, which I’m assuming sounds like the four channels of the apocalypse.

*On later reissues, tracks A1 and B4 were referred to as “War Pigs/Lukes Wall” and “Jack the Stripper/Fairies Wear Boots.”

Album designed and photographed by Keef.