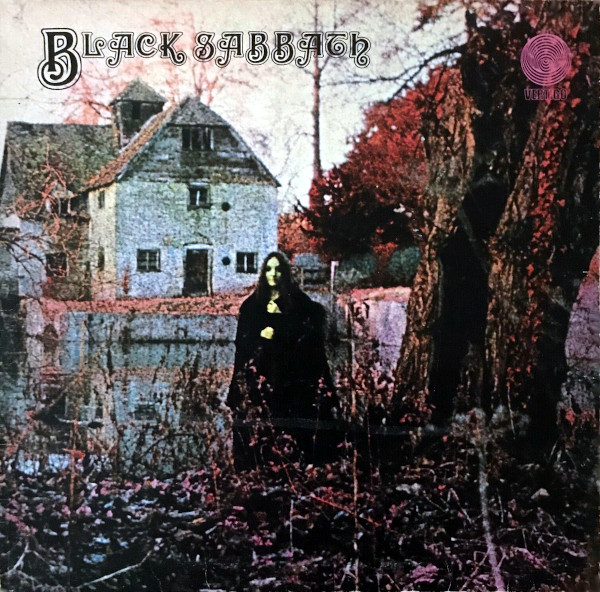 This demon seed of the death metal movement was darker than Purple and made Cream look like choirboys.

Kronomyth 1.0: Symphony for the devil.

Now, maybe you don’t care about that. And, honestly, that’s okay. You don’t need to appreciate death metal to enjoy Black Sabbath. Its heavy blues-based riffs and over-the-top arrangements aren’t so far removed from the work of Cream, Led Zeppelin and Deep Purple—all bands that at one time or another have been associated with dark forces. (Maybe not so much Cream, but that’s an historical oversight in my opinion.)

Rock bands had dabbled in the dark arts before, but none took it to the extremes of Black Sabbath: songs about signing your soul over to the devil, lyrics that dealt with death and pain in often gruesome detail and, just for good measure, an inverted cross prominently displayed on the inner gatefold. Then there was the music: bleak, crushing, conveyed in a sulfuric haze. Tony Iommi’s guitar had a unique sound, attributed to the loss of two fingertips during a work accident at a sheet metal factory, which forced him to find unique workarounds that gave him a true “heavy metal” sound. (No pun intended, since I’m not that much of a jerk, just pointing out the connection.)

Despite being recorded in a single day, Black Sabbath became an instant classic. Although it technically contains only six songs, they’re some of the best songs of Sabbath’s career. Paranoid and Master of Reality refined the approach and featured more studio tricks, but they don’t outrock or outshock Sabbath’s first.

A Review of Side One
I’m spending slightly more time on this album than usual, since I’m feeling guilty after reading Alan’s Album Archives. Rather than a song-by-song review (you, after all, have things to do), I’m starting out with baby steps, side by side (at least for works that were originally released on elpee and thus, presumably, gave thought to such things). The opening moments of Black Sabbath are calculated evil, hearkening back to the horrorshow sounds of Shades of Deep Purple, with a cold church bell intoning in the dreary rain. That it sounds like the opening to a horror film is no accident; the band was named after the classic horror film by Mario Bava. This song planted the demon seed of death metal with its musical vision of Hell, lurching along at a zombie pace before picking up at the end in a big Cream-like, almost classical finale featuring Iommi’s lead guitar.

[Hilariously (not), the entire rest of this review was lost because it was accidentally overwritten – the first time in over 1,000 reviews that that’s happened. Not blaming the devil, just saying. So what follows is the inferior second version, ugh.]

The wizard/teacher is a popular archetype in rock (Uriah Heep and Jethro Tull come to mind), but Sabbath’s The Wizard is no Gandalf. Ossie plays the harmonica, Bill Ward whacks his cowbell a few times (don’t ask for whom the cowbell tolls…), but otherwise this is great, black, blues rock that sounds like Cream curdled by evil. Behind the Wall of Sleep is a blueprint for death metal (it mentions the word “corpse” like eight times), with Geezer Butler stepping up with some great bass and macabre lyrics. Side one ends with N.I.B., purportedly written about Bill Ward’s beard, and not a reference to “name in blood,” even though it’s a song about signing your soul to Lucifer, which seems like an extreme length to go for a goatee and a soul patch. Iommi’s guitar riff sounds more than a little like Cream’s “Sunshine of Your Love,” but it’s got nothing to do with the sun; it’s (to borrow a phrase from Time Bandits) pure unadulterated evil.

A Review of Side Two
Again, I’ve got to rewrite this whole section too. Dammit. Black Sabbath had been earlier coaxed into recording a version of Evil Woman, which had been a recent hit for a band named Crow. (Again, pure coincidence.) Despite the title, it’s the least menacing track on the album, with slightly inferior recording (surprisingly) from Barry Sheffield. In the US, the B side from that single, Wicked World, appeared in its place. Neither song is quite up to the material recorded on the album session, although “Wicked World” has a weighty riff behind it. The second track, Sleeping Village, is heavy blues-rock in the vein of Cream and Led Zeppelin but blacker. It begins with an acoustic guitar intro from Iommi and Jew’s harp (right, who saw that coming?) called A Bit of Finger, then launches into some explosive blues-rock with Godzilla-sized riffs. Tom Allom does a remarkable bit of engineering here, managing to make Iommi’s guitar solo sound as if it’s actually in your head. The album closes with Warning, a track originally performed by Aynsley Dunbar’s Retaliation, who apparently didn’t get the last word. I know, two covers out of seven songs is a bit disappointing, but at least none of them are Neil Diamond songs (“Kentucky Woman,” I’m looking at you).

Regional Variations & Remasters
Over the long and dolorous years, record labels have kept the US and UK versions intact in terms of whether they used “Wicked World” or “Evil Woman,” even for the compact disc reissues. In the mid 80s, Castle did this weird thing where they reissued all of the original Sabbath albums with a single (and often unrelated) live track. In this case, it was “Tomorrow’s Dream” from Volume 4. In the Aughts, Sanctuary released a much-improved Deluxe Edition that included an entire disc of outtakes and reconciled both sides of their first single.

Original elpee version (Warner Bros.)
A1. Black Sabbath
A2. The Wizard
A3. Wasp
A4. Behind the Wall of Sleep
A5. Bassically
A6. N.I.B.
B1. Wicked World
B2. A Bit of Finger
B3. Sleeping Village
B4. Warning

Album design and photographed by Keef.