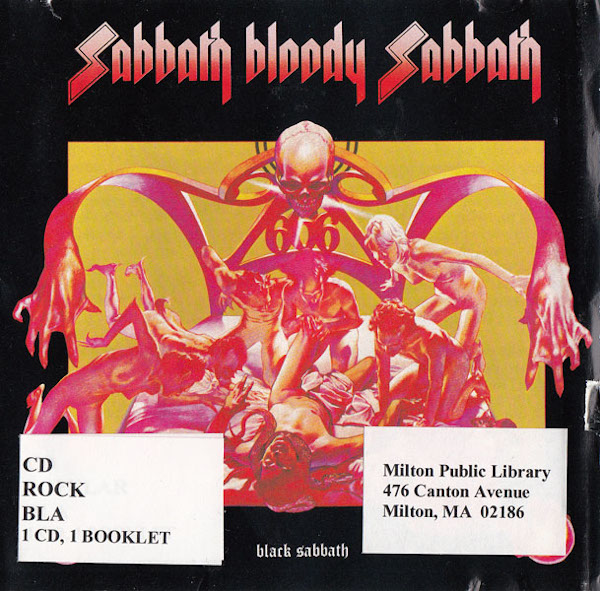 A little-known fact is that I started this site in 2002. Since then, it’s gone through several iterations—amazingly without improving one iota in terms of design or navigation. The latest iteration involves rewriting some (actually, many) of the old reviews. I saved this one (originally from April 24, 2011), but with an addendum at the end to reflect the fact that Sabbath Bloody Sabbath has since inched itself to classic status in my estimation.

“Overinflated fluff,” says the Troll, stabbing the air behind his head in a slow yawn, as if to say he’d heard this all before in Vol. 4. “But this has an orchestra, synthesizers, multipart suites,” I remind him. My eyes visibly widen at those last words, yet he’s unimpressed. And maybe he’s right. The world didn’t need another prog band in 1973; it needed metal warriors who would slash through ranks of suited, seated cellists and flautists to plant a new bloody standard at the podium.

Fortunately for us, Black Sabbath’s most orchestral album still has its share of dark energy, from the opening “Sabbath Bloody Sabbath” to the heroic ending of “Spiral Architect.” In between you’ll find what may be Tony Iommi’s prettiest instrumental (“Fluff”), an eerie and synthetic spectre of a song (“Who Are You”), a three-part heavy metal suite (“Killing Yourself To Live”) and a melodic metal song that would have felt right at home on the superior Sabotage (“Looking For Today”).

The Troll notwithstanding, a lot of people will tell you this is one of Black Sabbath’s best albums. I’m not one of those people. The production isn’t up to snuff, and it’s almost impossible to hear songs like “Sabbath Bloody Sabbath” and “A National Acrobat” without thinking how much heavier they could have been.

From its origins in the dungeons of haunted Clearwell Castle, Sabbath Bloody Sabbath was destined for some measure of enshrinement in the Sabbath songbook, but it’s an unfocused album. Paranoid, Master of Reality, Sabotage… those albums are solid blocks of metal. SBS show cracks of light in its dark mass: strings, synthesizers, suites and some piano from soon-to-be-ex-Yesman Rick Wakeman. For all the talk of “the riff that saved Sabbath,” wasn’t their utter damnation their salvation?

No, blame the drugs or the drink, the Sabbath war machine was winding down despite Iommi’s attempts to wind them back up again. Sabbath Bloody Sabbath is a better album for his efforts; it is not, however, one of their better efforts. That said, a merely average Sabbath album is better than most things in this cursed world, so you still need to buy it, bang your head to it and burn a small amount of incense at its altar. (Note: The CD lists “Spiral Architect” at 5:29, the LP at 4:40. Could just be an error, but I’ll confirm it as soon as I dig my vinyl copy of SBS out of the vault.)

Now, this is me writing in 2020. I have a few bones to pick with the previous review. This is one of Sabbath’s best albums, specifically their fifth-best album (you’ll have to pry Sabotage from my cold, dead hands). That’s not a back-handed compliment, but an acknowledgement that Sabbath Bloody Sabbath is indeed classic Sabbath. Overinflated? More like the floodgates of creativity had been opened after Vol. 4’s trickle of treats. “Sabbath Bloody Sabbath” could have been heavier? Nothing is heavier than the riff introduced in the middle of that song, not even the opening riff on “Sweet Leaf.”

I didn’t have any earthly use for Vol. 4, but on Sabbath Bloody Sabbath all is forgiven. The songs are stuffed full of great riffs and different musical ideas, as though the band were being swept up in a creative second wind (a point that Sabotage confirmed). And dark? Ozzy literally laughs in the face of death at the end of “A National Acrobat.” This is more than a return to form; their royal blackness was back.

All songs written by Black Sabbath.