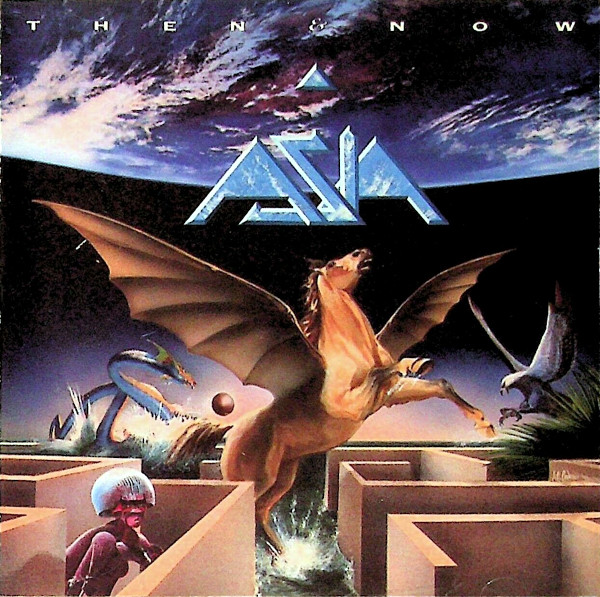 The band brought in new writers to finish the story of Asia and propped it up with footage from the first three albums.

Half an album of hits and half an album of (insert anagram for “hits” here). In retrospect, the figure from Astra crouching in what appears to be a toilet stall should have been fair warning. Apparently, in the interim since Astra, Asia recorded one more song with Mandy Meyer (the weepy, wimpy “Am I In Love?”) and then tried out a series of guitarists (Steve Lukather, Ron Komie, Thin Lizzy’s Scott Gorham) before settling on Pat Thrall for the 1990 tour.

The four “new” songs presented as Now are nothing more than faceless, corporate product. “Days Like These” was probably pitched to Starship at some point. “Prayin’ 4 A Miracle” was written by David Cassidy and his wife. Yes, the guy who played Keith Partridge. And his wife.

I wasn’t a big fan of Alpha, but it is a masterpiece compared to what the label cobbled together for Then & Now. If there’s one Asia album you don’t need to own (and, let’s be honest, there’s more than one), this is it. And while we’re on the subject of what a ripoff this album is, hiring another illustrator to re-create the artwork of Roger Dean is lame. I mean, really, a pegasus? That is just a horn away from being a unicorn, people.