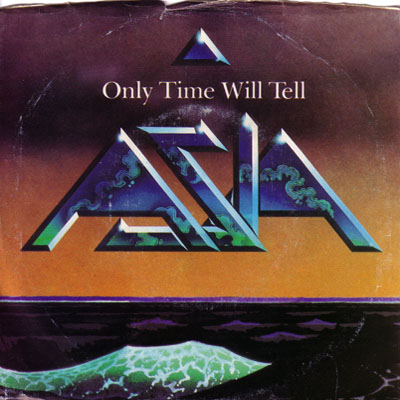 One of the most recognizable synth lines from the 80s, for better or worse.

The second single from Asia was the heroic, stoic “Only Time Will Tell.” The introduction is completely over the top, with clarion keyboards and plenty of cowbell, yet somehow it matches the larger-than-life lyrics from John Wetton. (Case in point: “The brightest ring around the moon will darken when I die.”) The original single features an edited version of “Only Time Will Tell,” while the promotional 7-inch contains a unique “short edit” on the flip side that features a slightly longer intro (go figure) and cuts out about a half-minute of instrumental segues that appear on the edited version. If memory serves, the original single edit stripped away the guitar solos, since who would possibly want to hear Steve Howe play guitar? Right, everyone except the people at Geffen Records.

Original 7-inch version (UK)
A1. Only Time Will Tell
B1. Ride Again

Promotional 12-inch single (US)
A1. Only Time Will Tell
B1. Here Comes The Feeling