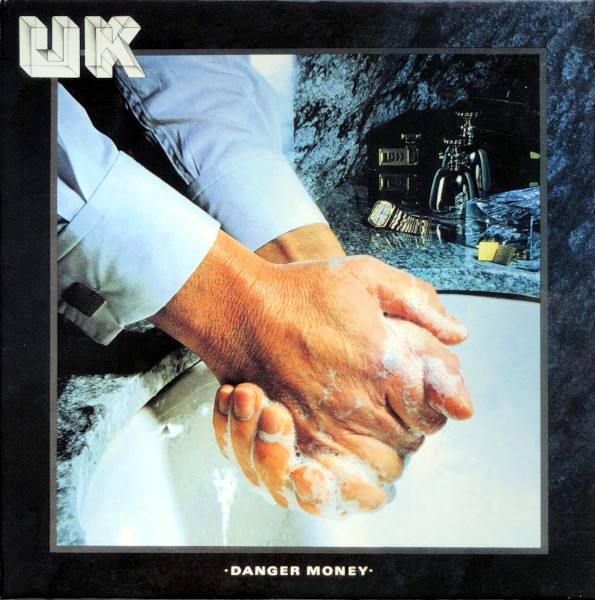 The group slims down to a trio and fattens up their sound with another classic album to stave off prog’s winter.

With Bruford and Holdsworth gone, Eddie Jobson and John Wetton raise the stakes to fill the spaces and come up with an even more cogent case for their existence on Danger Money. Ex-Zappa drummer Terry Bozzio doesn’t really show up until mid-album, but when he does, everything clicks, so much so that the absence of half the original band is almost a non-issue.

The dynamics of a trio are different, and Jobson focuses on the keyboards over the violin, which gives this record a more pronounced ELP feel than their first. The Ponty references are understandably fewer as Jobson limits his violin to a few tracks; “Casear’s Palace Blues” is the only track where Ponty came to my mind. The songwriting is remarkably solid this time around: “Rendezvous 6:02,” “Carrying No Cross” and “Nothing To Lose” (which foreshadows the work of Asia) would handily make the cut for a Best of U.K. (were such an animal to exist).

While the album’s most obvious reference is the first U.K. effort, much of Danger Money feels like an update of the ELP/KC approach to prog. In fact, when Crimson regrouped in 1980, they might as well have been called U.K.C., as they seemed to borrow from both. At six songs, the effort may seem slight, but U.K. packs a lot of music into them, particularly for a trio. “The Only Thing She Needs,” for example, holds your attention with shifting arrangements, while “Danger Money” does the same through Wetton’s lyrics (which are some of his best over his career).

Danger Money, if not Jobson’s finest hour, is at least his finest forty minutes. No prog keyboardist to my mind was playing better music than him in 1979, but more importantly Jobson had found a way to update prog’s excessive scale without the excess baggage of complicated themes and classical posing. I hear elements of Sparks on “Danger Money” and Ultravox on “Carrying No Cross;” two bands that had successfully (at least in the musical sense) managed to bridge the past with the future. That U.K. didn’t have a future is one of prog’s great tragedies, since they might have continued to make great music for years (and staved off the formation of Asia). What they did leave behind, while slight in size, was monumental in effect.

All songs written and arranged by Eddie Jobson/John Wetton.