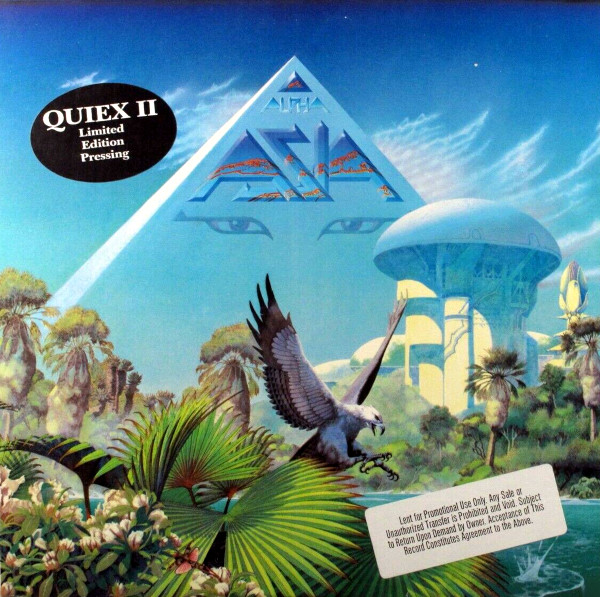 Don’t cry, it’s just the end of another rock & roll dream as Asia released this downer.

The followup to the hugely successful Asia was a formulaic affair featuring the songs of Geoff Downes and John Wetton. Steve Howe and Carl Palmer recede into the background, as much as that’s possible, although there are still some solid songs on here, such as “Never In A Million Years” and “Midnight Sun.” You get the sense, listening to Alpha, that Asia was after a big single on every song. The keyboards and Wetton’s voice dominate the landscape, and the material lives or dies by them. On the hits (“Don’t Cry,” “The Smile Has Left Your Eyes”), the effect can be pretty deadly.

When this album came out, I completely ignored it, which was easier to do since the radio stations weren’t pumping out “Don’t Cry” and “The Smile Has Left Your Eyes” every hour. Years later, when I picked this up on disc, I was appalled to hear that the band had dumbed down their approach even more. These days, I’m more inclined to listen past the production for the ideas, and there are good ideas at work on “Open Your Eyes” and “My Own Time,” for example. It does take some effort, though, to get past the thin, hurried sound of “Don’t Cry”—it literally feels like the band was rushing to record another single (in fact, it was the last song they recorded for Alpha).

As Yes fans have learned over the years, bands are organic entities; for Asia, organ failure was imminent. Alpha abandoned what little artistic integrity had remained on Asia, and I for one didn’t shed a tear when Howe left to form the Asia-soundalike, GTR.

Tracks 1-10 written by John Wetton/Geoff Downes unless noted. All tracks arranged by Asia.