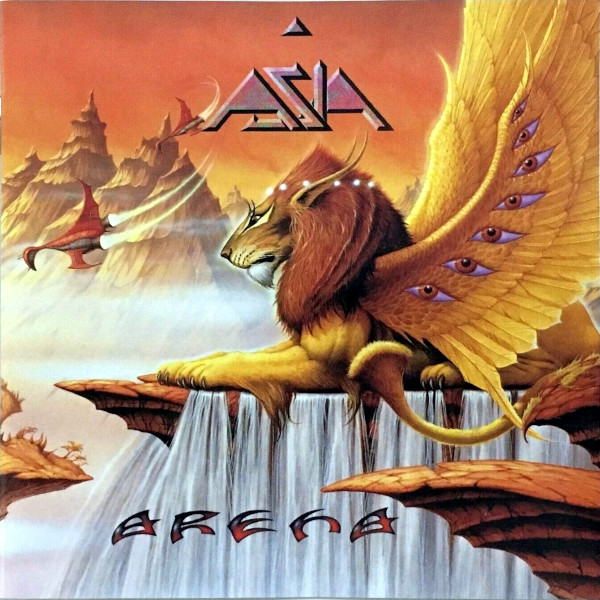 Despite the title, this is the group’s most intimate album yet, featuring atmospheric production and new sounds.

After two albums of progressively louder studio arena rock, Asia released the introspective Arena, their least arena-friendly record since, maybe, ever. Arena is clearly a creature of the studio, with the band bringing in studio legend Elliott Randall and second guitarist Aziz Ibrahim to refine their musical attack. I honestly prefer this over their last two releases (Aqua, Aria), as it tones down the guitar/vocal histrionics in favor of a more balanced mix. In many ways, this is the Astra of the Payne era, with tasteful arrangements that bring the focus back to the group’s strongest asset, Geoff Downes’ keyboards.

The opening instrumental “Into The Arena,” featuring a cameo from Japanese guitarist Hotei, initially seems to follow the pattern of past albums (i.e., instrumental bookends) but soon suggests a frothier version of Santana or Steely Dan, not the portentous Asia of old. That melody reappears on the title track, and it’s quickly clear that something is different about this Asia. Maybe it’s the Latin elements or the fact that Downes now has the space to take a keyboard solo, but you get the sense that over-the-top power ballads and anthems won’t be the order of the day. [Note: the video link below is from a YouTube reviewer, because a whole bunch of even weirder stuff comes up when you search on YouTube for “Asia music 1996.”]

Payne and Downes have struck upon a profitable songwriting partnership, or perhaps the operative word is formula. There is certainly something formulaic in the band’s verse/chorus approach to nearly every track. “Heaven,” “Two Sides of the Moon,” “Tell Me Why” and “Never” are songs you’ve heard from the pair in one form or another before. The difference is that Payne and Al Pitrelli usually pushed each song over the top, and that doesn’t happen here. Instead, with Randall and Ibrahim, what you get are some unexpected surprises: a reggae ending to “Two Sides of the Moon,” middle eastern rock on the awesome “U Bring Me Down.” There is the sense that both guitarists approached Asia from a fresh perspective, and in some ways Arena is like hearing the second incarnation of Asia with new ears.

Asia is still of peripheral interest to prog aficionados, even though the fantastic album artwork from Rodney Mathews (Aqua) promises an adventure that never arrives. Still, prog fans won’t walk away empty-handed from tracks like “The Day Before The War,” “Never” and “U Bring Me Down.” I don’t doubt that Asia could make a good neo-prog album if they wanted to. Prog isn’t really their legacy, though. I found myself feeling most nostalgic during “Falling,” as it reminded me of the quirky and compressed sound of The Buggles.

Look, John Payne is no Trevor Rabin or Billy Sherwood. There’s more Michael Bolton than Michael Sadler in the man. As a melodic foil to Downes, however, he ensures that Asia’s albums are never far from a good hook or a grand chorus. The days of packed arenas are well behind them, but there’s clearly still some good music to look forward to.

All songs written by John Payne/Geoff Downes unless noted.