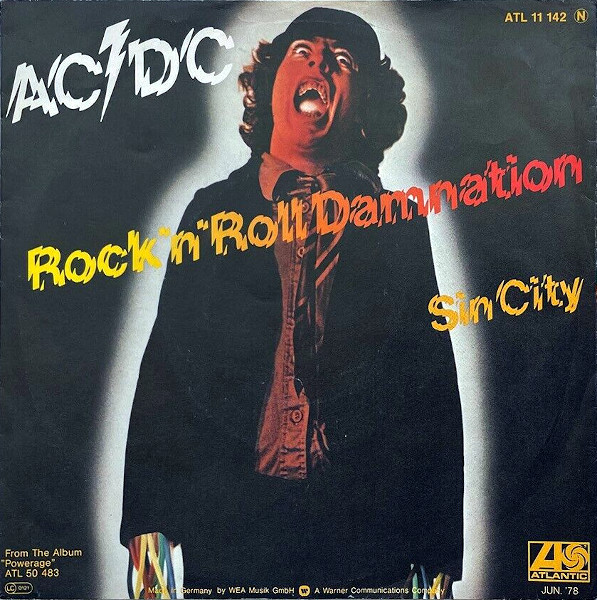 Not one of AC/DC’s 25 most essential songs, according to Rolling Stone.

Few bands pandered to the dark forces as openly as AC/DC: Rock ‘n’ Roll Damnation, Highway to Hell, Sin City, Hell Ain’t a Bad Place to Be, ad infernalis. If Mick Jagger had sympathy for the devil, Bon Scott was openly sucking up to him. You might say it was all for a laugh, but I don’t believe it was Bon who had the last laugh. Anyway, the battle of good and evil aside, “Rock ‘N’ Roll Damnation” is a pretty damn good song. I don’t think there’s a bad song on Powerage. I don’t think there’s a great song on it either. You could have swapped out the A side for “Sin City” or “Kicked in the Teeth” and no one would have complained.

In the original Australian release, a rare nonalbum track was included on the B side, “Cold Hearted Man.” The only thing missing on it is a great solo from Angus; otherwise, it’s right in line with the rest of Powerage’s progeny. This song actually got me thinking about whether I’d had the mastermind to the AC/DC formula all wrong. I’d always put Malcom in the middle between Angus and Bon, but he may have been the real genius of the three. His power chords are the structure on which every AC/DC song is built. Not that there aren’t plenty of accolades to go around in AC/DC, but I’ve probably sold him short over the years.

Of minor interest, the single version runs about 30 seconds shorter than the elpee version; so far as I can tell, they just faded out the ending early. The Dutch single also has an unusual running time of 4:42 for the flip side, “Kicked in the Teeth.” It’d be interesting to know if it’s a different version than the elpee version, if anyone feels inclined to set the record straight.