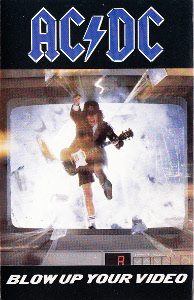 Kronomyth 13.0: BLOW IT OUT YOUR ANGUS. After two self-produced records of diminishing returns and a compilation with a couple of carrots, the band turned things back over to Harry Vanda and George Young for the in-all-ways-superior Blow Up Your Video. Yes, the album cover is pretty gay, I’ll grant you that, but the music on here totally, completely rocks. Brian’s voice seemed to be going to shit, and BUYV finds a way to turn his shredded voice into a scalding menace. As for Angus and Malcolm, the riffitude is redolent of their glory days: “Heatseeker,” “That’s The Way I Wanna Rock N Roll” (from whence the title track comes), “Meanstreak,” “Nick of Time,” “Kissin’ Dynamite.” Harry Vanda and George Young understand the band’s strengths better than the band themselves, it would seem, and manage to capture the group’s raw energy in the studio—something that both Flick and Fly failed to do. Although the album sold over a million copies, nearly topped the UK charts and was nominated for a Grammy, I still think it’s an underrated album. At least, I didn’t appreciate this album for years, maybe because I always approached it by way of the albums that came before and, really, who had the energy after that? Blow Up Your Video blew the band back on course, since this is exactly where you’d hope to find them seven years on from BIB: rockin, rollin and revoltin against the empty vanity of the MTVenal videodrome. Maybe you didn’t give a flying flick for their last two studio albums, but BOYV is definitely prime angus.