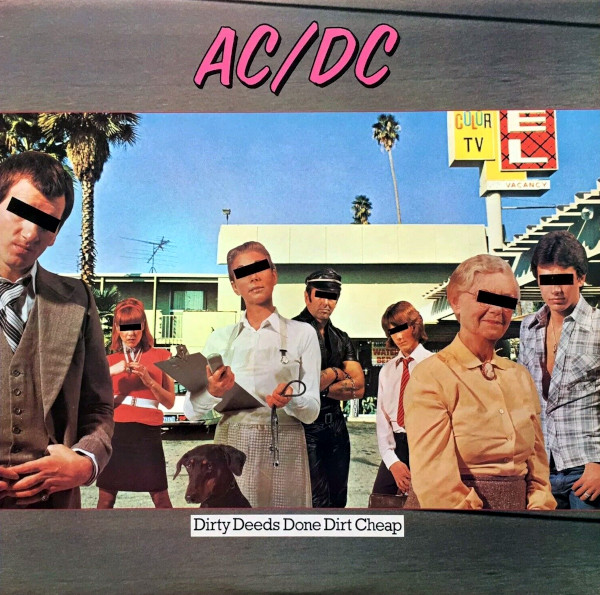 The band’s classic third album. After Back in Black, Bon came back for a final bow.

Maybe the rock & roll Fates knew what they were doing when AC/DC’s third album didn’t get a US distribution deal. The excellent High Voltage had, after all, barely scraped the Top 150 and the most that might be expected from Dirty Deeds was more (or less) of the same. Instead, the album lay unheard by most Americans until the AC/DC phenomenon was at gale force after Back In Black, when it was released to a now-adoring American audience and quickly rose to number 3 on the charts—at the time, though briefly, the band’s highest US chart position—eventually selling over 6 million copies here.

We’ll need to wind the clock back a bit, however, to get a proper perspective of Dirty Deeds Done Dirt Cheap. The album was originally released in 1976 in an Australian version (unique cover, unique tracks, unique track listing) and the more widely known International version [which featured “Rocker” and “Love At First Feel” instead of “R.I.P. (Rock In Peace)” and “Jailbreak”]. I’ve only heard the International version, and it is hands-down one of the band’s tightest albums in terms of songwriting. “Dirty Deeds Done Dirt Cheep,” “Big Balls,” “Problem Child” and “Ride On” are some of the best Bon-era bits, bar none. You may not find as many Angus guitar solos on here, and there are times when Mark Evans just seems to be hitting the same note over and over, but pound for pound this stuff is still worth its weight in gold.

“Bon loved an innuendo and was obsessed with his balls.” — Malcolm Young, discussing the origins of “Big Balls” in a 1992 interview.

Of course, if T.N.T. or Let There Be Rock had been the prodigal son resurrected instead of Dirty Deeds, the band’s mythology might be different. Instead, Americans have the memory of Bon come back to say goodbye, a million-dollar check he couldn’t cash in hand, loosed from this mortal coil before he could repent, rattling about in the heavy metal hall of heroes like Marley’s ghost and probably having more fun than you are right now.

All titles by Angus Young, Malcolm Young and Bon Scott.