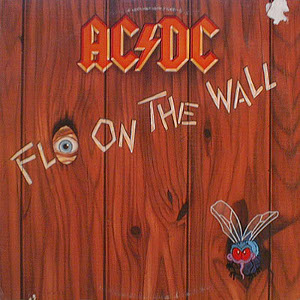 Kronomyth 12.0: SHOO TO THRILL. Fly On The Wall is the book report scribbled out in the early morning before first period. Disappointing, because the band is capable of great things. And yet AC/DC had laid the foundation for raw and simple heavy metal, so overthinking the music would be antithetical to their, um, idiom. The trouble with Fly, as it turns out, isn’t the hurried state of the songwriting but the harsh state of Brian Johnson’s voice; it’s so unintelligible in spots that a lyric sheet is actually necessary. Or maybe not, since if you know the song title then you’ve already got half the lyrics. There are a number of AC/DC fans who will tell you this is underrated, good dirty fun, and it is… if your idea of fun is hearing AC/DC live down to their potential. If you don’t like the band, this is just the sort of fuel you’re looking for—and in 1985, a lot of folks were gunning for AC/DC and youth-corrupting rock and roll in general. Although nothing on here belongs with their best work, you can salvage some of it: “Shake Your Foundations,” “Sink The Pink.” Both of those songs turned up on Who Made Who, however, so you can opt out of owning Fly if you want. At this stage, AC/DC’s music had become a predictable product: head-banging rhythms, lascivious lyrics, great guitar solos and lots of energy. Fly On The Wall delivers on these four cornerstones, but barely. The band who exemplified cartoonish rock excess in the ‘70s was becoming a caricature of rock in the ‘80s, even as they tried to take a stand against the greater evil, hair metal. Aerosmith kind of had the same problem for a little while before they just gave in to it. If you’re convinced that there’s no such thing as a bad AC/DC album, I won’t disavow you of the notion. I will agree that what separates a good AC/DC album from a bad one is probably a combination of timing and two or three great songs. If you’re determined to buy this record, get it on compact disc since the vinyl version is punchless.