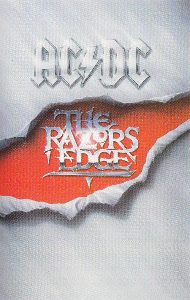 Kronomyth 14.0: A CUT ABOVE. For the first time since Back In Black, the band turned to an outside producer, Bruce Fairbairn, the man responsible for the recent rise of Bon Jovi and Aerosmith. I know, right? Only The Razor’s Edge really rocks because this is AC/DC we’re talking about. Like Mutt Lange before him, Fairbairn elevates the band’s meat-and-potatoes approach as if he were rolling out the red carpet for rock’s royalty on every song (which, of course, he was). On The Razor’s Edge, the band hasn’t changed their approach but the payoffs are bigger: “Moneytalks,” “Thunderstruck,” “Are You Ready,” “Rock Your Heart Out.” Collectively, they’re the most epic collection of AC/DC songs since Back In Black. There are, of course, hard-liners who will tell you that The Razor’s Edge comes dangerously close to being the kind of spandex rock that the band abhorred. Nuh-uh. This is the same AC/DC you know and love with just a little more spit and polish. The backing vocals and atmospheric production are sometimes a touch too much, and a few of the songs (e.g., “Mistress For Christmas,” “Let’s Make It”) are better forgotten, so I wouldn’t say this is a perfect album, but those are small sins in return for forty minutes of AC decency. I think Fairbairn deserves a lot of credit for getting so much great music out of the band, especially given the dire state of Brian Johnson’s voice at this stage. That said, I don’t particularly enjoy the guitar solos on this album because they include effects that Angus doesn’t need. If the album feels a little over the top (and it does), when was AC/DC understated about anything? Like Back In Black before it, The Razor’s Edge promises another decade of decadence.

All songs written by Angus Young and Malcolm Young.