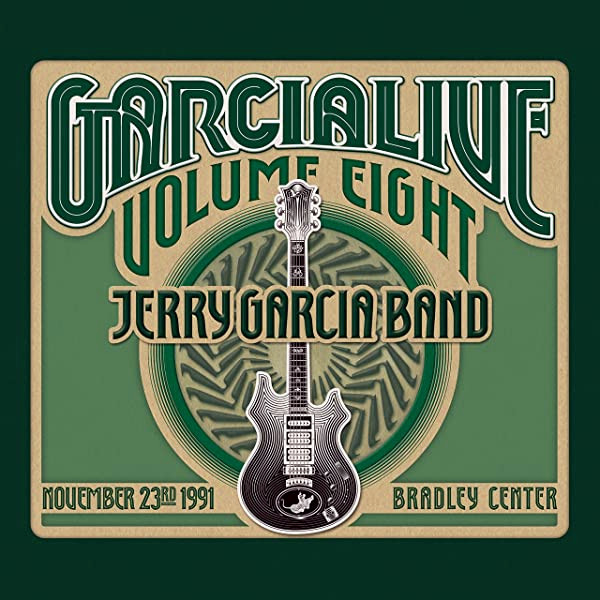 A live recording from the Milwaukee Bucks’ venue, or deadheads for cheeseheads.

This is a concert recording from November 23, 1991 recorded at the Bradley Center, the home of the Milwaukee Bucks for almost 20 years. At this stage in the GarciaLive series, I don’t need to tell you what to expect. Jerry Garcia’s voice had grown craggier, his guitar-playing had slowed a bit but was still surprising and the rest of the Jerry Garcia Band played from a reverent distance. For your money, you got a few gold nuggets from the wider book of the Dead, contemporary classics given an idiomatic reading, some JGB songs, blues/spirituals and a “new” tune or two while basking in the presence of a living legend.

Not being a moon-eyed Deadhead, I can die in peace without hearing every disc in the GarciaLive archives. Clearly, there are plenty of folks who feel otherwise, as evidenced by the fact that GarciaLive Volume Eight entered into the Billboard Top 100, and this 22 years after the man’s demise. If you choose to savor every morsel, have at it; I’m sure your world is richer for it. I’ll sit down to listen to “Deal,” “Reuben and Cherise” and “Cats Under the Stars” just about any day, and enjoyed hearing some of these songs from Garcia for the first time (“Ain’t No Bread in the Breadbox,” “Lay Down Sally”). As an added treat, JGB does a thirteen-minute cover of The Manhattans’ “Shining Star” that includes one of the show’s best guitar solos.

In their prime, the Jerry Garcia Band was the next best thing to seeing the Grateful Dead. By 1991, however, Garcia and the band were past their prime. Despite having played together for years, Melvin Seals is the only musical foil to Garcia’s guitar, and even then it only appears in brief bursts. Little of the music interplay that made the Dead so exciting appears here. There is still joy to be in hearing Garcia cover a song like “The Night They Drove Old Dixie Down” or “Bright Side of the Road,” but it’s often tempered by the realization of how much better the original versions sounded (I literally had to resist turning off their cover of “Tangled Up in Blue” to listen to Bob Dylan’s version).

All that said, it’s a testament to Jerry Garcia that his touring career lasted longer than many of the venues he played in, including the Bradley Center, which was torn down in 2019 after 31 years. Buildings fall, but legends stand tall forever.