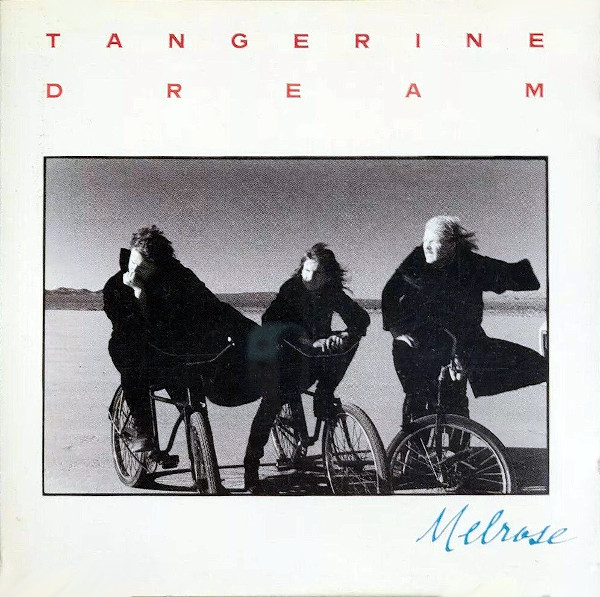 The next generation arrives to lead the group through the 90s and beyond.

Beginning with Optical Race, Tangerine Dream began packaging its music into clean five-minute packets that featured the same core components: melody, rhythm, programmed pattern and sometimes a solo of guitar or saxophone. It was a different phase than the synthesizer meditations of the ‘70s and the socially conscious electronica of the ‘80s, though no less commercial. Tangerine Dream has always played to the tastes of the times as much as modern taste has followed Tangerine Dream. The addition of Edgar’s son, Jerome Froese, also introduced a new generation and new ideas influenced more by the post-Kraftwerk club scene than Pink Floyd. Jerome’s hand isn’t so strongly felt on Melrose (it would become evident on later works like Goblin’s Club), and in many ways the album is simply a continuation of Optical Race.

“Rolling Down Cahuenga,” “Dolls in the Shadow,” “Melrose” and “Three Bikes in the Sky” are as representative of what was right with this era as anything (why “Electric Lion” was selected for the subsequent Private Music compilation is beyond me). Yet I had the sense that the early albums were each important statements (Phaedra, Force Majeure, Tangram), the pursuit of a muse over circuits and currents. Melrose is the pursuit of product: very good product held to high standards, but without the element of risk that made the early Dream so exciting. With everything converted into bits and bytes, the old analog muse is bypassed and with her the happy accidents of chance. Melrose is musical super-realism, and fans who peered into the shadows of Phaedra looking for monsters may find this phase of the Dream too brightly illumined for such wild speculation. That said, if anyone can survive in a purely digital domain, it’s Tangerine Dream.