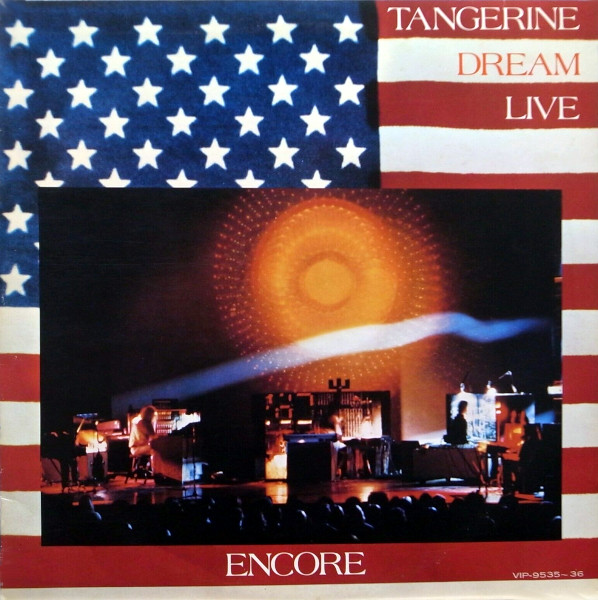 A double album that collects four performances from the band’s first U.S. tour and the last appearance with Peter Baumann.

Tangerine Dream staged their first major U.S. tour in 1977, which was apparently enough for Peter Baumann, who left the group following the tour. Encore is a double-elpee souvenir from the tour featuring four side-length songs each totaling about 18 minutes. And this is where I would tell you that Baumann went out on a high note, only Encore is something of a bore as Tangerine Dream albums go. While the songs are stylistically similar to TD albums from this period, they feel more improvised than usual and in some cases seem to plod along with few changes.

Now, you can tell me that all Tangerine Dream albums from their classic period (1970-1980) are works of art and that I am an un(mono)enlightened clod. I’ll admit that Encore is the last proper album from their classic period that I encountered, so I may feel like I’ve heard all this before because I probably have. If this were, say, the first or second TD album that I owned, I might have a very different opinion.  In other words, if you heed my advice that the last Tangerine Dream album with Peter Baumann is the last Tangerine Dream album with Peter Baumann you need to own, the end result would be nothing more than a shared ennui with Encore.

The opening Cherokee Lane is typical of TD from the time, with brisk pacing and lots of sequencers (which I equate with goodness, so no complaints there). Monolight is very mellow at first (reminiscent of Eno’s ambient worlds) before turning toward electronic pop, the shape of things to come from Baumann. Coldwater Canyon and Desert Dream have some interesting ideas but the same could be said for their film soundtracks.

Despite its size, Stratosfear, Ricochet and even Cyclone have more to offer than Encore. I don’t doubt that there are archival live performances with better results from our mystical knob jockeys of the purple twilight. The original performances themselves were no doubt a sight (who doesn’t like lasers?), but as an audio-only experience Encore is a slight let-down.

All material written and played by Chris Franke, Edgar Froese and Peter Baumann.