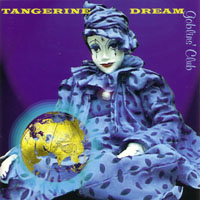 I wrote a review of this for AMG with the sole purpose of working the word “confluence” into a sentence, apparently. In honesty, the point of said sentence was to confirm that Froese & Sons was a viable musical enterprise in the new millennium. You see, for me the music of Tangerine Dream has always drifted dangerously close to a mix of mesmerism and charlatanism; most electronic music really. In the old analog days, there was enough button-pushing and knob-twisting going on to convince me that those electronic workbenches were 21st century church organs, arms and legs in constant motion conjuring sound from a mad fusion of wire and metal. With the dawn of the digital age, however, this hotbed of chemical and electrical creation yielded to a sterile nursery of test-tube sounds, the embryo of origin already conceived with the aid of a professional programmer (midiwifes to a new age) before a single note had been played. Which is a longwinded way of saying that analog electronic music is a mix of science and art while digital electronic music is premixed, like cookie dough in a tube. When Edgar Froese conscripted his son, Jerome, to join Tangerine Dream, I met the efficiency of it with a raised eyebrow. Had the Tangerine brand become so self-automated, I asked myself, that anyone could drive it? So I was happy to discover that Goblins’ Club wasn’t simply another 60 minutes of electronic wanking, but an actual collection of new songs. “Towards The Evening Star,” “Rising Haul In Silence” and “Lamb With Radar Eyes” hold their own with anything Tangerine Dream has released in the last 15 years, a fusion of their shorter melodic form with modern rhythms and pancultural flourishes. If the rest of the disc sounds like filler, should it surprise us in a catalog overflowing with more than 100 albums? Personally, I think the remixes and repackages are inessential to all but completists, but the albums of new works (Turn of the Tides, Tyranny of Beauty, Goblins’ Club) continue to matter. Jerome clearly has his own vision to add to the Dream, which has kept fresh a sound that might have otherwise grown stale. That’s what I had tried to intimate in a single sentence: the confluence of cross-generational styles was key to keeping the Dream alive. Suddenly, we see not just the efficiency but the efficacy of adding Jerome to the mix, since he saw the Dream through the eyes of a new generation. The result is more renovation than reinvention, and a fresh invitation to escape through sound, perchance to dream once more.

* Track 7 replaced with “Forth Worth Runway One” on the Australian CD release.

All songs composed by Jerome and Edgar Froese unless noted.