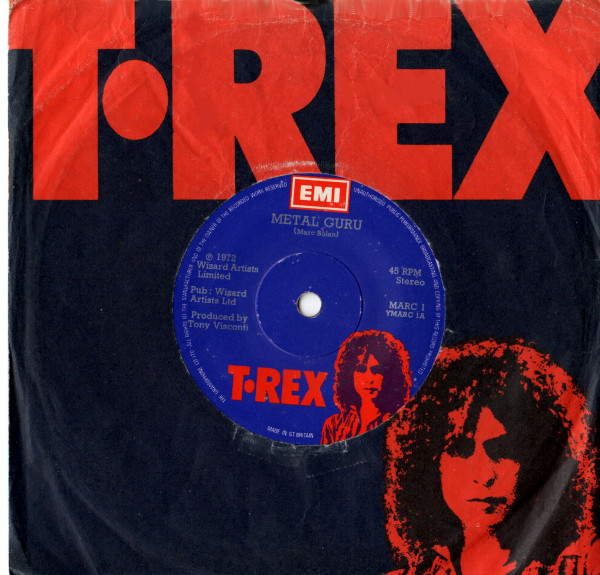 The perfectly polished “Metal Guru” marc’d the second musical miracle leading up to The Slider.

If “Telegram Sam” signaled the arrival of the golden era of Bolan, “Metal Guru” broke wide the floodgates. From the opening notes, we’re swept into trextasy; no four-second intro to adjust your airsuit for Bolan’s helium arrangements. This was the first T. Rex song I ever heard other than “Bang A Gong,” and that by way of accident, while sifting through singles at a college radio station. I don’t recall hearing “Lady,” so it’s likely we had the radio promo version. At any rate, “Metal Guru” is pure magic: science fiction and fantasy and glam rolled into two-and-a-half-minutes of tangible joy.

In the UK, the single was supported by two tracks that didn’t make the cut for The Slider, “Thunderwing” and “Lady.” The first is one of Bolan’s curious car tales (curious for his fear of automobiles), similar in sound and effect to “Baby Boomerang” and “Rock On,” so perhaps it made the grade in a different shade. “Lady” is an acoustic song, but not a ballad, with the appearance of an organ or Moog in the music, which isn’t something you hear everyday in a T. Rex song and gives it a unique feel among Bolan’s bits.

At this stage in his development, Marc Bolan could do no wrong. Every song, even the ones that you know he tossed off in half an hour, dripped with honeyfied genius. True, many of them sounded the same, yet there wasn’t a single one that you didn’t wish lasted one minute longer. Note: In 1991, the Marc on Wax label re-issued this single with the original Meta Guru/Lady configuration (only the UK added “Thunderwing”) plus the delightful “Bolan’s Zip Gun” (wish it had lasted for three minutes) and an alternative mix of “Solid Baby” featuring one of the few times you’ll hear a lead singer call out for a hi-hat solo.