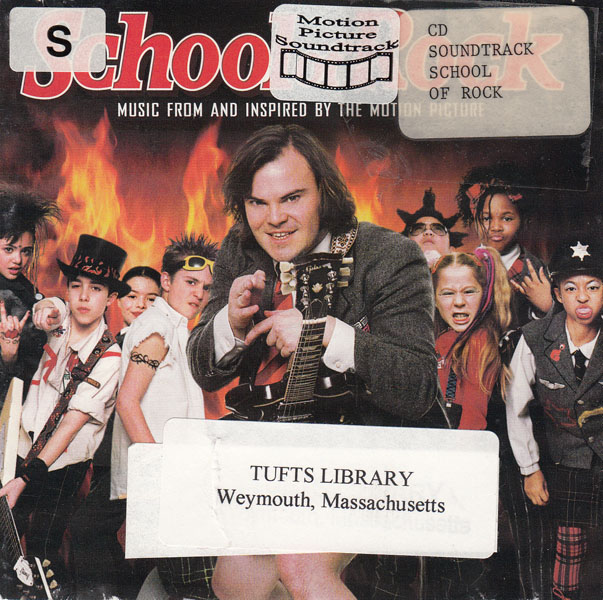 Not the schooling in classic rock it should have been, but if you saw the movie you only have yourself to blame.

Nacho Libre. Now there was a terrible movie. But Jack Black in Angus Young schoolpants was can’t-miss comedy, right? Actually, as I’m learning, every time he dons a silly outfit I’m due for some measure of disappointment. The soundtrack at least should have been a killer, but here again it falls shorts. An eclectic mix of classic rock, original songs and some contemporary tunes, the School of Rock soundtrack didn’t impress me one bit.

“If I’m not singing it, you know, (director Richard Linklater) probably picked it to be in there. Like the montage, the teaching-kids-to-rock montage, with that song that’s playing there (“Bonzo Goes To Bitburg”). All the like punk rock, ’70s and ’80s punk rock that’s in the movie is all Linklater, ’cause he’s a little more evolved than me with his musical tastes. I’m more of a heavy metal-leaning guy, prog-rock, too.” — Jack Black, explaining how songs were selected for the School To Rock movie in an interview on IGN movies.

The original material that did make it needn’t have come. I like children, but I don’t enjoy listening to them sing. The two No Vacancy tracks are all right, especially Heal Me, I’m Heartsick, which is one of the funniest power ballad sendups I’ve heard in a while. For some reason, the soundtrack features a different version of The Doors’ Touch Me than the film (how may versions are there of a 35-year-old song?) and replaces the original track from The Darkness, Black Shuck, with Growing On Me (the latter likely an Atlantean desire to better cross-market their act).

The School of Rock soundtrack should have inspired more. Imagine an album full of classic early ‘80s metal from AC/DC, Ozzy Osbourne, Dio, Iron Maiden, Judas Priest, etc. Now that would’ve rocked and taught the kids a thing or two.