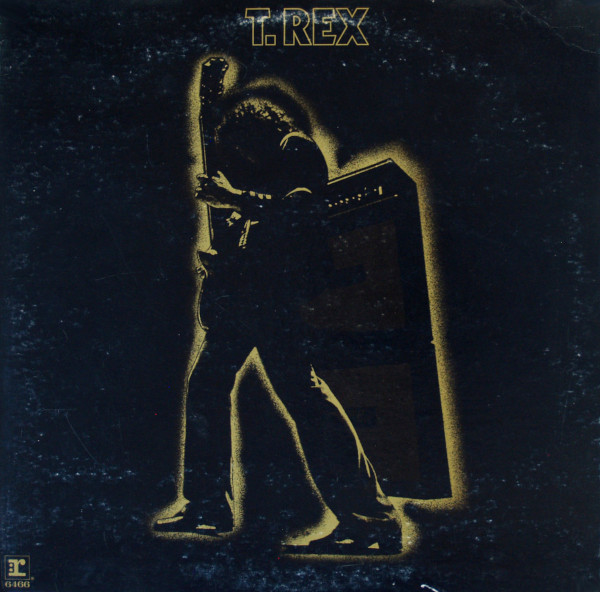 T. Rex plugged in, and the world tuned in to hear the “new” glam wunderkind.

Kronomyth 6.0: Give me your daughters.

Electric Warrior rode in on the English glam wave to conquer the hearts and minds of English (and, to a lesser extent, American) boys and girls with such sublimely strange slices of pop music as “Jeepster,” “Bang A Gong (Get It On),” “Life’s A Gas,” “Cosmic Queen” and “Planet Queen.” The album topped the UK charts and entered the US Top 40, making it Bolan’s most successful recording to date. Something of an underground sensation until now, T. Rex was suddenly the star he always knew himself to be.

A clue to Bolan’s new fortunes is found right in the title itself: Electric. This was T. Rex plugged in and spaced out, with an actual band behind him (the rhythm section of Will Legend and Steve Currie) plus the irrepressible harmonies of Flo & Eddie (Mark Volman and Howard Kaylan, respectively). King Crimson’s Ian McDonald even gets into the act, blowing sax on a pair of tracks. The real magic of Electric Warrior, however, happens behind the boards. With a who’s who of engineers (Roy T. Baker, Malcolm Cecil, Rik Pekkonen and Martin Rushent) on hand and the visionary Tony Visconti at the helm, the songs from Bolan sparkle like jeweled candies: impossible to eat but queerly beautiful to behold.

Visconti may have perfected his glam-rock sound with David Bowie, but he introduced it with Marc Bolan on Electric Warrior. There was an inkling of this on the earlier T. Rex, from the heavy use of strings (“Diamond Meadows”) to lightheaded touch of Flo & Eddie (“Seagull Woman”), though nothing before prepared you for sexy jag-you-are stride of “Jeepster” or the surreal funk of “Mambo Sun.” The wonderful “Cosmic Dancer,” however, is nothing if not the perfection of “Space Oddity,” with the tragic Major Tom now tramped out triumphantly in feather boa and silver boots. The first side closes with a devilish twist on doo-wop (“Monolith”) and an ill-advised attempt to play the blues, which is definitely not in Bolan’s color wheel.

Side two opens with that most perfect of glam anthems, “Bang A Gong (Get It On).” The sexuality that had always boiled under the surface of Bolan’s music, obscured by the precious fairy tales, now came raging at the listener in a heavenly riff for the ages. It’s such a good idea, that Bolan revisits it a few songs later on “The Motivator.” (Hidden egg: Hear any similarities between the ending of this track and the beginning of Lou Reed’s “Waltzing Matilda?”) “Planet Queen” and “Girl” showcase the softer side of Bolan’s gilded chariot (“Girl” even sounds like King Crimson’s Islands at one point).

The two ticket-punchers at the end

As much as I enjoy Electric Warrior, it’s the one-two knockout punch at the end that always floors me. “Life’s A Gas” is perhaps the best verse-chorus payoff in the entire Rexography, proving that Bolan didn’t need Flo & Eddie to transport listeners to new places. And “Rip Off” has always been, for me, the curtain torn down, revealing the sham behind the glam. In many ways, it’s a prelude to the punk movement that would follow in five years, a slap to the senses that strips away the veneer. The ending, which I always suspected was architected by Malcolm Cecil, is gorgeous, capping off a marvelous anomaly in Bolan’s otherwise cheery garden.

Electric Warrior and The Slider are cornerstones in the house that glam rock built. In a sense, they’re a culmination of everything that Bolan and Visconti had been after from the beginning: a Willy Wonka-esque world of sound peopled with strange creatures and sung in a new tongue. The glam acts that followed were often trite, but Bolan was onto something big with Electric Warrior. It wasn’t pop art. It was as much fantasy as his Tolkienesque tales of old, yet made alive in the real world, a frankenstein’s monster of old dreams and new appetites, stitched together with state-of-the-art engineering, strings, saxophones, a bizarre castrato chorus and Bolan’s perfectly overmatched electric guitar. Bolan was the author of Unicorn. He is the hero of Electric Warrior. And the world needs heroes more than authors.

All selections written and composed by Marc Bolan.