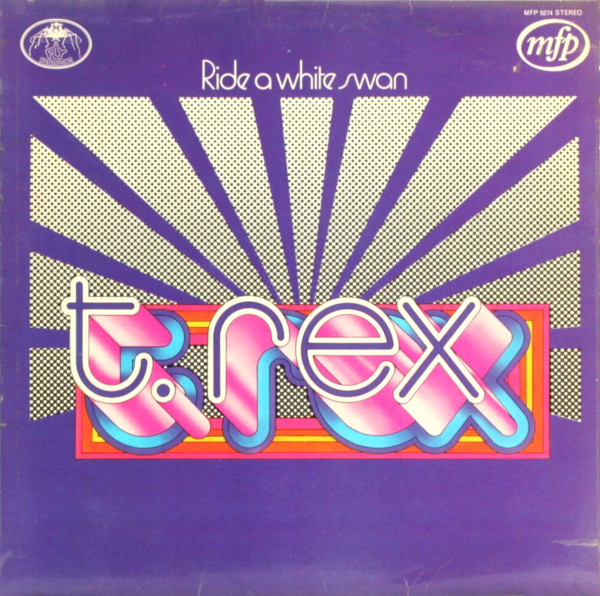 Released at the height of T. Rextasy, this compilation highlights the acoustic Tyrannosaurus Rex years before the breakthrough Electric Warrior.

I read that this was the first record Johnny Marr of The Smiths bought. He turned out all right, so how bad can Ride A White Swan really be? Well, it ain’t no Electric Warrior. This is a compilation of the material that led up to Bolan’s electric reinvention as a glam superstar, which is to say acoustic hippy music that sounds like Mungo Jerry’s “In The Summertime” over and over and over, but with a bongo player instead of a jugband.

Not to suggest that the seeds of greatness weren’t already evident: “Stacey Grove,” “Ride A White Swan,” “One Inch Rock” and “Debora” presage the subsequent masterworks, “King of the Rumbling Spires” is already there. Back in the day, this music was likely more transcendent, since Bolan was just so beautifully inscrutable. Even as progressive rock groups released their chewy epics for teenagers, tweens had their own psychedelic hero in the author of “Elemental Child.” Maybe it didn’t hold up to introspection as well as Aqualung, but Bolan didn’t trouble himself with reason any more than the caterpillar in Through The Looking Glass, so why should you?

“It was quite a strange and somewhat esoteric record. Marc Bolan was on television a lot and having hits in a big way, and it was quite weird music he was making.” – Johnny Marr, as quoted in Billboard.

The sound quality is all right considering the source; “One Inch Rock” and “Debora” were even “electronically enhanced” (ooh!) to simulate stereo. Its role in the Marr mythology notwithstanding, there really isn’t a compelling reason to own this record today. The Tyrannosaurus Rex releases have been reissued on CD with superior sound, and countless compilations wrap up the early singles in more appealing packages. Ride A White Swan is very much a product of its time, drunk with optimism as T. Rextasy reached its orgasmic apex, and likely to find a kindred spirit mostly in those who remember when.

A1. Ride A White Swan
A2. Debora
A3. Child Star
A4. Black Cat (The Wizard’s Hat)
A5. Conesuala
A6. Strange Orchestras
B1. One Inch Rock
B2. Salamanda Palaganda
B3. Lofty Skies
B4. Stacey Grove
B5. King of the Rumbling Spires
B6. Elemental Child

Released on elpee in October 1972 in the UK and the Netherlands (Music for Pleasure, MFP 5274).