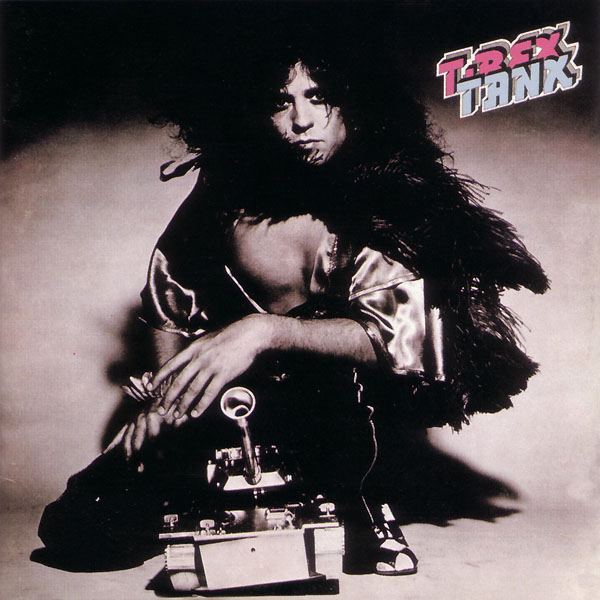 Tanx adds horns and mellotron to the T. Rex sound. To their legacy, it adds nothing.

Life is strange. One moment, you’re a cool demigod of the demimonde; the next, you’re stinking up the universe with vulgar poetry and the shrill sounds of strangled saxophones and meddlesome mellotrons. There are some people who will tell you that Tanx is a worthy successor to T. Rex’s last two albums, but those people are living in a moon-eyed daydream. Scrape off the surface gunk and, yes, you’ll find some of the old genius at work, but all you’ll be left with are a few scraps.

Electric Warrior and The Slider left much to the imagination. The part of you that knew “Ballrooms of Mars” might not have contained the wisdom of the ancients gladly left the room, and for two minutes it was you, T. Rex and the inscrutable cosmos as one. You can’t reasonably sustain the same illusion on Tanx. Marc Bolan grunts and grinds his way through a greasy fog of saxophones, mellotrons and electric guitar while spewing out nonsense lines like “Clean out your toes Rose and go and lick some uncooked meat” (from “Rapids”). You sort of knew that Bolan’s lyrics didn’t always make sense, but you didn’t expect them to give offense.

To my tastes, Tanx throws away a perfectly good formula that Bolan had been honing since the first T. Rex album. Faerie poetry, trembling vocals and those wonderful grooves of unearthly beauty were the band’s best assets. Bolan and longtime producer Tony Visconti were clearly after a bigger sound on Tanx, adding saxophones (courtesy of Howard Casey), mellotron (from Visconti himself) and opting for a more aggressive attack. The album didn’t feature a fleet of tanks for nothing; this was an all-out sonic assault. Unfortunately, Bolan was a lover, not a fighter, and frankly had no more business trying to be a lead guitarist than David Bowie or Ian Hunter.

So is Tanx to be avoided? No. This is T. Rex one year removed from some of the greatest music ever recorded. I’d no have no trouble vaunting “The Street And Babe Shadow” to the top of my T. Rex list on any given day, and you could make a case for “Broken-Hearted Blues,” “Shock Rock” or “Born To Boogie” as worthy heirs to the warrior’s throne. But the cracks that were so carefully concealed in the past are on full display for the first half of “Tenement Lady” (which cruelly teases us with what might have been), “Rapids,” “Mister Mister” and “Mad Donna.” Then again, I like T. Rex but fall short of being a fanatic. Bolan inspires blind devotion in some, and they’ll be happy to tell you that Tanx is a steamroller of a record. I won’t argue that point, since it left me feeling flat. The expanded remaster adds a few latter-day singles (“20th Century Boy,” “Solid Gold Easy Action”) and a creepy Christmas message from beyond the grave. As long as you’re giving Tanx a go, you might want to steer in that direction.