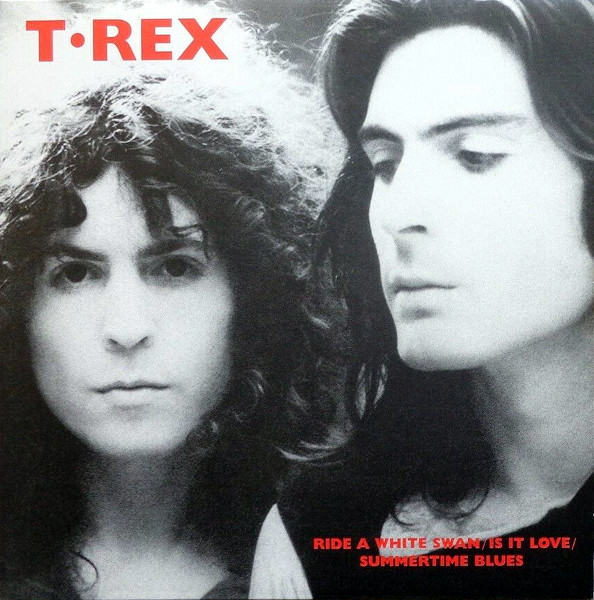 All aboard for the electric T. Rex train! Before he banged a gong, he rode a swan.

This is the lightbulb moment when the electric Rex clicked, even occasioning a name change to the abbreviated (and appropriately sleeker) T. Rex. It was as though Marc Bolan had discovered that he could use the electric guitar as a proxy for his penis, and we were all about to receive membership in the new T. Rex love juggernaut. (Totally blaming the meds for that one. Being sick sucks.)

The elements that would crystallize with “Get It On (Bang a Gong)” are already here: the chugging guitar, strange backing vocals and strings. Ride A White Swan is still an animal of the magical forest of old (the references to the Beltane festival would have caught the ears of wiccan sisters), but once Bolan traded in the supernatural animal transport for cars there would be no stopping him.

For most of Europe, the flip side was a twofer: the electric Is It Love from the upcoming T. Rex album, and an acoustic cover of Eddie Cochran’s Summertime Blues. The former is another sexy, electric number that pointed forward to the breakthrough Electric Warrior. The latter had been crushed by The Who several months earlier on Live at Leeds, so I’m not sure if Bolan hadn’t heard their version or just had the hubris to cover it with bongos and acoustic guitar anyway. It works surprisingly well with bongos, not that I’ve ever heard a bad version of “Summertime Blues.” That is, until I searched for “summertime blues” on YouTube and watched the first minute of Alan Jackson’s version. Then I searched Google for “Is Alan Jackson gay?” because, you know, one shirtless guy in a pair of overalls could just be a coincidence, but not two.

Back to the very heterosexual, one-shirtless-guy-wearing-overalls world of Marc Bolan, some markets were short-changed with only one B side, “Is It Love.” In the US, Blue Thumb couldn’t seem to make up their mind, and released versions with either “Is It Love” or “Summertime Blues” as the B side.